AJ MacGinty named at outhalf for USA’s clash with England 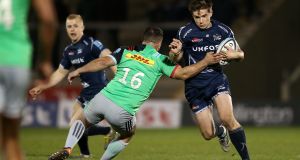 AJ MacGinty starts for the USA against England on Thursday. Photograph: Jan Kruger/Getty

Cardiff wing Blaine Scully will lead the USA into their World Cup opener against England at Kobe Misaki Stadium on Thursday.

The 31-year-old veteran of 50 Tests spent two years at Leicester until 2015, while there are eight players in the matchday squad currently attached to Gallagher Premiership clubs.

In total there are five changes to the side that dispatched Canada 20-15 on September 7th, while hooker Joe Taufete’e is hoping to build on his record of scoring 20 tries in 23 caps.

The Eagles are based in Okinawa where their training has been hampered by Typhoon Tapah, forcing them to practice at an indoor facility.

Gary Gold, the former Bath and Worcester head coach now in charge of the USA, knows his side enter their first Pool D match as heavy underdogs.

“You need to match fire with fire. When the power and the pace comes from England, we need to have the vigour from a defensive point of view,” Gold said.

“That’s the idea, although it’s a lot easier said than done. We understand the magnitude of what’s coming and we’re excited about it.

“We want to play against teams of the ilk of England because we need to improve. We’ve got massive respect for them — they’re not World Cup contenders for nothing.”