O’Mahony and Aki both ‘on track’ after HIAs, Henshaw to return to ‘organised training’ 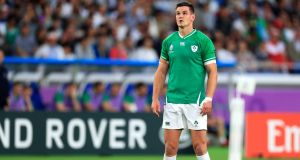 The Irish management have stated that injuries to Johnny Sexton (thigh) and Josh van der Flier (stitches over the eye and cramp) will not rule either player out of Saturday’s Japan match in Shizuoka.

“Johnny took a bang on his thigh after about 20 minutes,” said an Ireland spokesman. “He felt a bit of awareness of it but he was removed tactically after the fourth try. Same with Conor Murray and Tadhg Furlong, they were removed tactically.”

Sexton received treatment following Furlong’s try in the 25th minute of Sunday’s 27-3 victory over Scotland, which led to Murray taking over the place kicking.

The Munster scrumhalf converted one of three attempts at goal. Jack Carty replaced Sexton after 74 minutes.

Despite failing head injury assessments (HIAs) during the opening Pool A game, Peter O’Mahony and Bundee Aki are “on track” to resume full training with the Ireland squad on Tuesday.

“If you pass HIA 2 and HIA 3 you don’t go to the return to play protocols (RTPP),” the Ireland spokesman revealed.

World Rugby confirmed to The Irish Times that if the team doctor has no “clinical suspicion and there are no criteria one symptoms” players can resume full training after passing HIA 3, and therefore avoid the RTPP that would prohibit contact until Friday (day 5 of the protocols).

Six are identified during the on-field assessment by medics: the player is not orientated in time, place and person, definite confusion, definite behavioural changes, oculomotor signs (e.g. spontaneous nystagmus which is a condition in which the eyes make repetitive, uncontrolled movements) and on-field identification of signs or symptoms of concussion.

Ireland only have time to train Tuesday and Thursday at the Yumeria Ground near Fukuroi with their hotel further north at a remote golf resort in the Shizuoka prefecture.

The management confirmed on Monday morning that O’Mahony and Aki passed the HIA 2 in the hours following the game. They cannot undergo HIA 3 - a medical evaluation that includes memory and recall tests to monitor players for possible delayed reaction to a concussion - until 48 hours after they suffered the damage.

On Sunday O’Mahony received running treatment from the 10th minute and was finally removed after carrying towards the Scottish try line just before Furlong’s 25th minute try.

“Following the game yesterday Peter O’Mahony and Bundee Aki have completed [and passed] HIA 2 post game and will complete HIA 3 this afternoon. That’s on track.”

Robbie Henshaw, having been scanned for a hamstring injury sustained early last week, will not play this week.

“Robbie is running well, so his rehab is accelerating, we’d be pretty hopeful for him as well.”

Hopeful that he can play against Japan?

“Hopeful that he can get back into more organised training for this week.

“Rob Kearney, Joey Carbery and Keith Earls are fully fit, as we said last week, they will train fully this week.”

Ex-Ryder Cup player Gordon J Brand dies aged 65 18:02
McGill in control against Wilson at the Crucible 17:34
US Masters to be held behind closed doors in November 17:18
Bundini Brown: The man who invented ‘float like a butterfly, sting like a bee’ 17:00
Griggs names 36-strong women’s squad 17:14
Crossword Get access to over 6,000 interactive crosswords