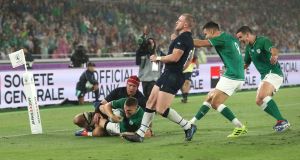 Whatever doubts there were about this Irish team focused in large part on the back three, but it transpires that those questions were a source of motivation for Andrew Conway, who capped a fine World Cup debut with his seventh try in 16 Tests.

“You can’t really avoid it. As much as I won’t go looking at what all you guys are saying leading into the game, it’s tough to avoid because other people like your family [read it]. You’re definitely aware of it but I actually like that. Whenever you are, not written off, but whenever there is a bit of panic media wise when a few lads are out, it gives you a nice gesture to put it up to some people who don’t think you are up to the task.”

By the same token, Conway wasn’t inclined to shout from the rooftops about his performance.

“It was all right, I dropped the easiest ball of the day but f**k it, what can you do. Excuse my language. But yeah, I’ll have a look back on it,” he said, although his response to that early knock-on only made his performance all the more impressive.

“It was a nervy old day leading into it. It was obviously a pretty big occasion and your head can go all sorts of places. I’ll reflect on it but I am quite happy.”

Conway places great store by mental preparation and visualisation. So it was that he walked the entire perimeter of the pitch with a ball in his hands, even the half of the pitch where Scotland were doing their warm-up.

Asked if that helped with his try in the corner which secured Ireland a bonus point, Conway said: “Yeah, corners wise, it’s specifically to do with corners and turning on them and doing a bit of self-talk and a few affirmations and yeah, that’s all I’m saying.”

Conway agreed that collectively Ireland can take confidence from this opening, statement win.

“Yeah definitely, definitely. Obviously Scotland are one of the tougher teams along with Japan, and then we’ve got Russia and Samoa. Scotland was a tough game coming up first and there’s probably no love lost between the two teams, going back to provincial level.”

“There’s probably not as much bite internationally, funnily enough, as say the Munster-Glasgow, and Leinster and Glasgow have a little thing as well,” said Conway smiling, “so you can definitely take confidence from it, but you can’t take too much confidence either. We watched a few of the games over the last few days and we know what else we’re going to come across in the latter stages, but that’s a long way away at the moment. We’re looking at just recovering at the moment.”

For James Ryan, watching every minute of the games on Saturday only served to whet his appetite. Explaining why Ireland were back to their best, Ryan said: “I think it’s all in the top two inches at this level. I think when we’re mentally primed and ready to go for the collisions and all that comes with the game, that’s when we’re at our best. So, maybe at times we haven’t been quite ready mentally.

“The last few games that’s been the difference, that we’ve built into the week and when the games come it hasn’t taken us by surprise so we’re ready to go.

“It’s a good feeling, getting it off to a start like that. I think the support today was unbelievable, and even in Yokohama itself it was class. In the past we have rested on our laurels and patted ourselves on the back but the big thing is that we know that’s not going to be good enough the further we go. We’ve got to just keep building now.”

Confirming that Iain Henderson was calling the lineouts, with input from himself and Peter O’Mahony, Ryan could not disguise his pleasure at the pack’s lineout work and try off a maul.

“Today was a good test for us particularly when the rain started belting down. I was really happy with how the guys went. I took one ball towards the end when they shifted up towards the front and the space was in the middle and in the pouring rain, ball like a bar of soap, Besty hits me at full extension. I was delighted with that. We made some good progress today.”