If Eddie O’Sullivan can turn things around at Biarritz, it’ll be quite a feather in his cap 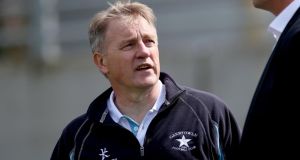 Without a head coaching job in rugby since leaving the USA Eagles after the 2011 World Cup, it became increasingly evident that Eddie O’Sullivan would have to take a plunge if he was to revive his career. He has certainly done that by bravely assuming the mantle at fallen Biarritz Olympique on the surfers’ paradise and sometimes treacherous seas of the Pyrénées-Atlantique in the south-west corner of France.

That he is not known to speak any French is the least of his problems, for knowing O’Sullivan, he is already taking French lessons and will have a decent command of the language by the time he takes over for pre-season at the end of June. He will most likely work with former local players as coaches, with ex-hooker Benoit August, ex-prop Benoit Lecouls and former winger Philippe Bidabe names being touted.

However, he also takes over a shell of a club compared to the one which won its fourth and fifth French championships in 2005 and ‘06, when also losing the Heineken Cup final to Munster in Cardiff by 23-19. That they subsequently routed Toulouse 40-13 in the French final at the Stade de France a few weeks later to retain the bouclier de brennus underlined the merit of Munster’s triumph.

Four years later they would beat Munster in the semi-finals in San Sebastien 18-7, and that night an old-fashioned cart drove around the picturesque tourist town with its population of around 25,000. It took about half an hour to return to where it started.

This was not the equivalent of Munster reaching the European Cup final, but Schull or Inchydoney.

Golden generation
Back in ‘06 their golden generation of Dimitri Yachvili, Imanol Harinordoquy, Damien Traille et all were in their pomp. Biarritz also had one of the four biggest budgets in the Top 14, thanks in the main to the backing of Serge Kampf, a French businessman who founded the computer services company Capgemini in 1967 and friend of former player-cum-club president Serge Blanco, whose drive and ambition helped swell their budget further.

Now 80, Kampf retired from Capgemini in April of 2012 and has significantly curtailed his investment in Biarritz. As part of Capgemini’s long-standing sponsorship of the club, they ploughed €3 million annually into BO, and Kampf is reckoned to have further supplemented this annually with around €2 million from his own pocket.

Meantime, along came benefactors such as Max Guazzini at Stade Francais, Mourad Boudjellal at Toulon and Jacky Lorenzetti at Racing Metro, to compete with Clermont and Toulouse. As the reliance on the BO old guard became more pronounced, the Challenge Cup triumph of two years ago was their last sting.

The warning signs were there last season when injuries and the international commitments of Yachvili, Harinordoquy and Traille made relegation a real prospect until their return prompted a late upsurge in form, and the mix between the veterans and the young players this season didn’t work. Such was their winning ratio with Yachvili and losing ratio without him that L’Equipe ran a sizeable article under the heading “Yachvili dependant”, but even his waning powers couldn’t save them this season.

Relegation has prompted a massive clear-out, with all of their golden generation save for the possible exception of Harinordoquy moving on. The 34-year-old Basque number eight and World Cup finalist has not decided on his future but he might stay on.

American flyer Takudzwa Ngwenya is also staying but that’s about it.

Along the way they may have over-reached. Despite increasing the capacity at their Parc des Sports Aguilera to 13,400, BO struggle to fill it consistently, and whereas their average attendance is 8-9,000, neighbours Bayonne average 14-15,000.

Annual budget
With their demotion to ProD2, their annual budget will further decrease from €16.8 million to €11 million, and aside from relegated Perpignan, there are a host of ambitions ProD2 clubs who want to jump aboard the Top 14 gravy train, including La Rochelle, Agen, Pau and Narbonne, one of whom will be promoted via the play-offs along with champions Lyon.

Biarritz need to rebuild their squad and quick for a grinding 30-game campaign, possibly with play-offs, in a division even more noted for its conservative, possession-based game, which offers only one automatic promotion place. It took Lyon, after significant investment, three attempts to do so.

“We think this is the solution for the future of BOPB,” said Blanco on the club website yesterday. “We have found ourselves the way we can manage the players and the development of the game. We want to change our opinions. We are at a crossroads. With Eddie O’Sullivan we will have a more British vision in the organisation, a new way of running our days, and another style of management. When one goes into the ProD2 one must be very humble.””

It would seem that they also need to be stronger than they currently are after the end-of-season exodus. Blanco may have chosen well in O’Sullivan, though whether O’Sullivan has chosen well in Biarritz remains to be seen. But if he can revive Biarritz and earn them promotion, such an achievement will assuredly revive his coaching career handsomely.

1 Farrell and O’Connell provide insight into changes in Ireland’s analysis
2 Andrew Porter diary: Meat, veg and intermittent fasting the order of the day
3 Anfield and Cheltenham show sports again lacking in looking after their own
4 Sideline Cut: Vignette shows why Bird is the true shark in The Last Dance
5 Philip Browne admits funding model for Irish rugby is not sustainable
Real news has value SUBSCRIBE