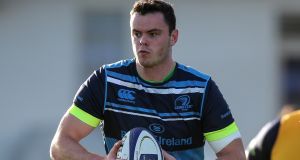 Increasingly, people are having a Jacob Stockdale moment. My first time seeing him was my debut as a live match commentator; Ireland v England in the 2016 Junior World Cup final.

Last summer Joe Schmidt capped three of the players from that game – James Ryan, Andrew Porter and Stockdale – while Max Deegan has featured for Leinster. This hugely accomplished generation are already among the grown-ups.

As a teenager his understanding of fullback duties was like that of a seasoned pro. Stockdale’s recent stunning displays for Ulster, especially Friday night’s victory over Wasps, along with Ryan’s European debut against Montpellier, emphasise the cyclical changing of the guard in Irish rugby.

Andrew Trimble failing to make Ulster’s match-day squad and Tommy Bowe squeezing onto the bench tells us that Stockdale is almost established.

Last week Rassie Erasmus said Rory Scannell is Munster’s nailed-on starting 12. In Leinster Barry Daly and Adam Byrne are picked on the wings ahead of proven veterans. See Ross Byrne at outhalf every time Johnny Sexton is unfit. Or Joey Carbery’s excellence, including defensive prowess, at fullback in every big game since Rob Kearney got injured.

It is a trend and natural progression at the same time.

But it is a trend.

Constant rotation is needed to ensure Irish rugby gets full value from its resources. Donnacha Ryan leaving the system meant Munster were allowed recruit another South African lock. South African locks have a history of getting injured not long after coming to Ireland but it gave Mark Flanagan his opportunity against Castres on Sunday.

Francis Saili was released by Munster to make room for Chris Farrell.

These former Leinster and Ulster players getting game time with Munster indicates the system is in working order. There is certainly a process in place whereby the Leinster academy or, more accurately, the private rugby schools in Leinster are supplying the majority of professional players. See John Cooney, from Gonzaga College in Dublin, starting for Ulster.

Cooney’s extended run at scrumhalf these past few weeks has been encouraging but I can’t help wondering how much he would have learned from a season alongside Ruan Pienaar. Maybe that was a financial decision, or maybe David Nucifora felt the need to do his best Tony Soprano impression.

I heard Stockdale say how much he is benefiting in Charles Piutau’s slipstream. The 21-year-old is being humble. Stockdale initiates as many attacks as Piutau. Just see how they combined for his try against Connacht. Or see Friday night’s fantastic scores. Again, it was Stockdale who put Piutau in the clear.

These examples highlight the importance of marquee foreigners in developing young Irish players.

See the audacity of Stockdale’s offload for Stuart McCloskey’s try – would he have tried that last season? He has seen Piutau’s outrageous skills from day one in an Ulster jersey. He had enough confidence to offload despite being tackled into touch.

When a young player gets named in the team over Bowe and Trimble he gains confidence, as opposed to struggling under the pressure, because the decision is validation of what he has been doing. He can organically become a better player.

We could see further evidence of this against the Springboks next month. It will be very interesting to see how Joe utilises his resources, what with Keith Earls in serious form, while Carbery and Simon Zebo are both also coming into real form.

But Piutau brings the art of No 15 to a ridiculous level – we are witnessing an escaped All Black, at his peak, playing Champions Cup rugby.

That is so rare.

At one stage on Friday, Piutau ran across the pitch sideways, trying to feel out an opening, tempting the Wasps defender to abandon their system. Most players can pull a player out of the line with footwork but only a certain few have the ability to complete the switch or slip a pass inside.

Everybody is learning from Piutau. It’s the same as Daly and Byrne finding space against Montpellier because Isa Nacewa knows precisely how long to hold ball in midfield. Robbie Henshaw should also learn from seeing this timing up close.

The 2019 World Cup cycle is spinning towards us. That’s partly why Schmidt capped Stockdale, Porter, Ryan, Kieran Treadwell and Scannell in June. Joe has a clear vision of the future. This could be an upgrade of the Easterby-Hayes-Horgan-Stringer-O’Gara quintet, capped against Scotland in 2000, that ended up backboning Ireland for the decade.

The fortunes of the national and provincial teams, while closely linked, can sometimes also breed antagonism.

Being a provincial head coach/senior coach/director of rugby is constricted by stakeholder interest. You are not the supreme commander of your most effective troops. Just ask Matt O’Connor. Even Les Kiss was compelled to criticise the IRFU following the Pienaar decision.

Nucifora does the recruitment and Irish players abroad regularly speak about contact from Joe. In fact, Nucifora appoints the aforementioned senior/head/director. See his comment following last week’s Munster appointment: “Johann is an exciting addition to our coaching team”.

That’s a clear message: you report to me.

Johann van Graan, if he doesn’t know already, will quickly discover the constraints that come with being a “head coach” of an Irish province.

The IRFU pay half the wage bill of his players so they are the largest stakeholders. This is not Saracens nor Leicester. The priority for O’Connor and Mark McCall is winning the Premiership. Their clubs, via achievement, naturally contribute to any success by England.

Saracens I believe are planning to rest some of their Lions during the season, partly because of the demands from the international game and to protect them before the title run-in. This is Saracens minding their players but more importantly on their terms.

Schmidt and Nucifora are adamant that they do not influence provincial selection. They do not directly mandate coaches but they can dictate when an international is rested. It’s more, rather than less, the same thing.

This is life in the healthy Irish rugby ecosystem.

Mark McCall, director of rugby at Saracens, is in complete control of rugby matters.

But, say, Jamie George has the yips. Can’t hit Itoje or Kruis to save his life. Schalk Brits wears number two the next weekend. McCall might even put French international Christopher Tolofua on the bench.

A hypothetical situation: Eddie Jones calls McCall. He wants to start George against the All Blacks. The key difference? It’s a request not an instruction. One that McCall can ignore.

In Ireland it remains a top down game. The national team pays for everything else.

But an inherent conflict appears to exist. What do the other provinces think when Nucifora is doing his job, negotiating player contracts, but doing it for the clear benefit of, say, Munster?

I read that van Graan will have similar duties to Erasmus but the 37-year-old needs to prioritise on-pitch coaching. All the other duties previously proved a major burden on an inexperienced head coach.

Van Graan’s mid-season arrival is similar to Les Kiss landing in Belfast after the 2015 World Cup. Not unlike Jerry Flannery and Felix Jones being assistant coaches in Munster, Neil Doak and Allen Clarke were the locals working with the Ulster squad. A year later Doak and Clarke are gone as Kiss brought in Jono Gibbes and Dwayne Peel.

Van Graan sounds like a special one whose international experience allows him to fill a similar role in Munster as Stuart Lancaster did in Leinster. Maybe he won’t need an older, more established voice alongside him. Maybe Flannery and Jones can get him up to speed with the Munster culture (Not so sure there will be any scope to flood the backroom with Afrikaners).

Either way, all the provincial coaches work in a system, that priorities the national team, and they know it.

The IRFU need to flog all the tickets for this season’s six Test matches at the Aviva Stadium. That is priority number one because that’s how the wage bill gets covered. There are no guarantees – less than 16,000 showed up at the RDS on Saturday for Montpellier.

All told it’s a system designed for a unique rugby nation, whether we are functioning at full capacity will be confirmed in due course.

The more Stockdale moments people see the better it is for everyone.

1 Gordon D’Arcy: Digging deep only recipe for Twickenham success
2 Robbie Henshaw and Bundee Aki to lead from the centre
3 Kieran Donaghy calls for GAA to shut down fans’ forums
4 Jurgen Klopp: ‘welcome to Anfield, it’s not over yet’
5 Seán Moran: GAA in trouble if sectional interests not accountable to rules
Real news has value SUBSCRIBE