All in the Scrum: Lancaster looking to inject philosophy into schools 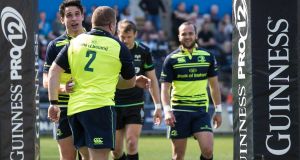 Ronan O’Gara has suggested Leinster hooker Sean Cronin could be a dark horse for the Lions tour. Photograph: Simon King/Inpho

Quote: “That’s why he will be the impact sub in each test vs NZ. Incredible feet and pace and power from Sean Cronin.”

Ospreys and Wales outhalf Dan Biggar missed the match winning penalty against Leinster on Saturday at Liberty Stadium. Taken in isolation, it looked damaging not only to his Lions prospects but Biggar’s status as the Ospreys starting 10.

However, the 27 year old’s post match interview with Sky Sports appears to have put the Head Injury Assessment protocol back in the dock.

“Can’t really remember an awful lot of the last 10 minutes, to be honest,” said Biggar, who returned to the field with heavy strapping over a bloodied eye. “I was a little bit dazed.”

Ospreys coach Steve Tandy contradicted Biggar’s suggestion that he was concussed: “Dan went through the HIA, he passed all the tests. We wouldn’t be putting somebody who wasn’t right on the field. I’m sure if Dan didn’t really feel like it at the time, he would have probably given the ball to Sam Davies.”

Davies being his main rival.

The whole assessment of concussive blows is about to heap further pressure on rugby referees with New Zealand trialing a “Blue Card” at amateur level.

“After receiving a Blue Card a player can’t return until they have completed a series of mandatory steps, including a three-week stand down from training and playing and a medical clearance,” explained Steve Tew, the NZRU CEO.

What referee, in their right mind, wants or can adequately cope with that responsibility?

Stuart Lancaster – who has signed a two year contract to remain at Leinster – spoke on Off The Ball last week about injecting his rugby philosophy into the province’s main artery: The Schools.

“It is an incredible catchment area of talent,” said Lancaster, talking of his desire to leave an indelible mark on the coaching methods in fee-paying (and traditionally secretive) rugby playing schools.

“The pipeline of talent in this area is fantastic. I didn’t really understand the schools cup before I came here. I actually did a session with the schools coaches in Donnybrook on defence.”

This week the Lancaster lesson focuses on the “unstructured nature” of attack.

The entire interview is well worth a listen.

Imagine how competitive Irish sport would become if Gaelic Games ever turned professional. Australian rugby union constantly struggles in that very environment and Sanzaar just made life even more challenging. The restructured Super Rugby format for next season will all but certainly lead to the dissolution of the Western Force.

The ARU voted for this.

Basically, the ridiculously complicated system will be reduced from a 17 to 15 team competition with five franchises divided into three conferences.

Good news for wealthy European clubs: One Australian (probably the Force) and one South African (the Kings or Cheetahs) franchise will be done away with.

“It is tomorrow’s players, coaches and fans who will now pay the price for this strategic mismanagement,” said Australia’s Players Union chief executive Ross Xenos. “This decision will be the catalyst for an irresponsible human cost without any genuine remedies to the real strategic issues that the game faces.

“Having signed Australian rugby up to a competition which reduced local content, diluted tribalism and disrespected fans with its lack of integrity, ARU have now agreed to a new model which has protected the expansion teams in Argentina and Japan at the cost of one of our own.”

No change is easy as the new structure aligns the Japanese Sunwolves with the Australian conference and ever improving Jaguares with South Africa but the repercussions, certainly in Australia, seem far-reaching.

Sonny Bill Williams is not quite the greatest, nor is he a draft dodger, but Muhammad Ali-lite he appears to have become with his latest decision to remain true to the faith of Islam.

Williams made an immediate impact on his return for the Auckland Blues – both on and off the paddock – following the latest absence playing Sevens, where he ruptured his Achilles at the Rio Olympics last year.

Sonny Bill, a Muslim since 2008, taped over bank sponsors BNZ on the Blues collar for the Higlanders game on Saturday.

Islam, as a religion, commands its followers to be opposed to the charging of interest on any money lending.

“He’s entitled to have religious beliefs and customs around that and it’s really between him and the Blues as to how that manifests itself. So we have no issue with it,” a BNZ spokeswoman added.

SBW – his initials being a brand in themselves – has worn the bank logo on jerseys while playing for other New Zealand franchises.

An interesting statement will surely follow: “In regards to my jersey during the game I’ll clarify the situation during the week,” he tweeted.

BTW, in the briefest of cameos against the Highlanders, Williams already looks certain to reclaim the All Blacks 12 jersey come the Lions series.