Gordon D’Arcy: My generation did the hard negotiations – this one is closing the deal

‘Despite being uncapped for two years, Marshall was so clearly ready to play a Test match in South Africa’ Photograph: Billy Stickland/Inpho

Without trying to be controversial or critical in any way of Joe Schmidt and the undoubted impact made by Andy Farrell, this victory belongs to the players.

Take Luke Marshall’s exceptional performance. Despite being uncapped for two years, Marshall was so clearly ready to play a Test match in South Africa.

That’s because Joe included him as the 24th man throughout the Six Nations. He would have done all the preparation, without the pressure, so he understood precisely what was needed.

Marshall had the confidence to play his natural creative game without over-thinking.

Best example of this is the try he created for Jared Payne after 10 minutes. That was a rehearsed move. Two forward carries, by CJ Stander then Iain Henderson, saw Marshall standing at first receiver.

It looked like Marshall would carry (option 1) or hit Robbie on a short line (option 2). The Springbok defence duly narrowed as Paddy Jackson went out the back (option 3). If ball watching, as most Springbok defenders are doing, you can’t see what’s coming next.

Marshall expertly nutmegs Damian de Allende. That allowed Jared to be fully rewarded for his lovely outside-to-in line from a blind zone behind the retreating JP Pietersen.

We saw Marshall’s value, yet again, when Conor Murray was blocked down near Ireland’s try line. The ball bounced to Luke. A few years ago that would have been me throwing a leg at it and probably slicing the ball for a five-metre lineout. Thankfully, a clean spiral cleared the 22. He has always possessed a quality kicking game.

So this historic win came from the players, unheralded players like Rory Best and Devin Toner. Like Jordi Murphy and Paddy Jackson. The collective performance would have dissuaded a lot of people’s presumption about their place in Irish rugby. After this victory, and hopefully what follows, they will forever be celebrated as the first Irish men to win in South Africa.

CJ Stander’s red card was a bad call influenced by the severity of Pat Lambie’s injury. A mistimed jump – strangely classed as a tackle – without any intent to legally hurt the outhalf, if Lambie hops up straight away it is a yellow card. Johnny Sexton has been hit late on several occasions this season and got nothing from it. James Haskell levelled him during the Six Nations. The same happened in Paris, and for Leinster away to the Ospreys when Sam Underhill marked Johnny’s card.

Difference being Sexton was able to get up. This is not to make light of a serious injury but they do happen in rugby.

Eben Etzebeth appeared to be obsessed with maintaining his reputation as an enforcer. He spent the first 15 minutes trying to find Stander with torpedo entries to rucks that narrowly missed direct, damaging contact. Which is worse? The action should be punishable, not the result. 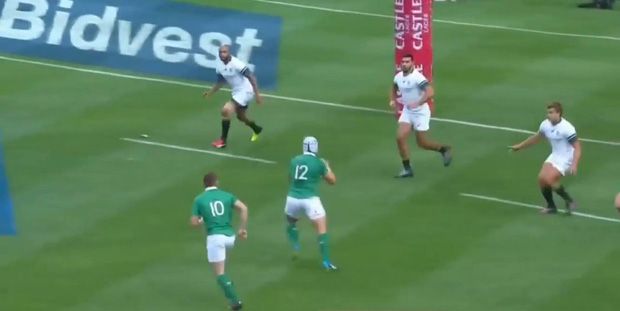 It looked like Marshall would carry (option 1) or hit Robbie on a short line (option 2). The Springbok defence duly narrowed as Paddy Jackson went out the back (option 3). 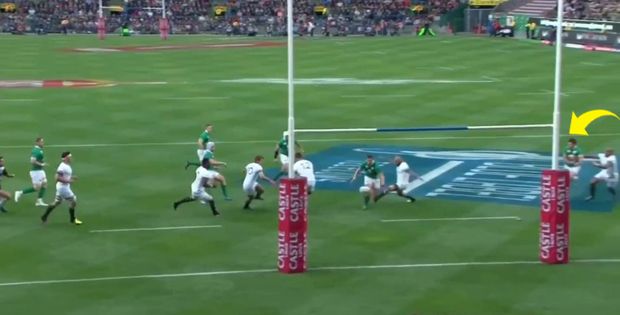 That allowed Jared to be fully rewarded for his lovely outside-to-in line from a blind zone behind the retreating JP Pietersen.

Mathieu Raynal seemed to send Stander off for the result of an accidental collision.

Then Robbie got an undeserved sin-binning for his late tackle on Elton Jantjies (whom he hit chest high but the sub outhalf fell away to avoid being hurt). That was just before Lwazi Mvovo’s try reduced Ireland’s lead to three points.

I only remember playing in two big games with 14 men. We won the 2001 Celtic League final against Munster at Lansdowne Road despite losing Eric Miller after 24 minutes. Then, in 2010, we lost 66-28 in New Zealand after Wayne Barnes sent off Jamie Heaslip for kneeing Richie McCaw while he illegally lay on me a yard from the try line.

Different times, different circumstances (the All Blacks easily being the best team in the world at the time), but when that happens everyone needs to be perfect in everything they do. Or else you’re under your posts listening to the same speech over and over again.

I mentioned last week that once players are in automatic mode anything is possible. But I also mentioned the need to have a cause that leads to players unconsciously digging deeper than usual.

Dev Toner was world class. Afterwards, when collecting the man of the match award, he dedicated the win to his father, Peter Toner. A fitting tribute to a lovely man.

Now, the strongest common goal was to win in South Africa, but there just seemed to be lots of little moments when players piled in behind a Dev carry, a big choke tackle, a lineout steal. There was a higher motive there and others rallied around him. Especially Iain Henderson.

With Dev running the set-piece, the number on Henderson’s back became irrelevant. I was worried he might be shackled by playing in the secondrow but Dev ensured that wasn’t a concern. He could just play rugby, and Iain Henderson is a fantastic, powerful rugby player who, along with Rory Best, ripped balls from Springbok forwards in sight of our try line.

On other days these were certain tries.

Jordi came in from the cold having been dismissed by some after the World Cup quarter-final to play like it was his last ever game. Maybe he felt like it was his last chance in a green jersey. Josh van der Flier had passed him out this season and when Seán O’Brien returned he slipped down to third choice openside at his club. His stop-in-your- tracks tackling denied South Africa the yard over the gainline they needed. And he always got back to his feet quickly, counter-rucking to slow Springbok possession.

Heaslip played his best game for three or four years. I have already written that about him three times this season. He was immense, and is having the season of his life.

Jackson’s was a fine performance. Keeping Ireland on the front foot, he seems to belong at this level.

The freedom afforded to Payne at fullback yielded serious profit for Ireland’s attack. The offloading, to twice put Trimble away, was already in evidence against Italy, when he ran from deep into the 15 channel before putting Simon Zebo clear. A gliding runner, Jared’s change of pace is deceptive. Saturday’s five offloads were the automatic option; the one that led to Conor Murray’s try saw him step outside Adriaan Strauss and when Mvovo glanced inside, Jared automatically knew the ball could be slipped out the back door in contact.

All this is what I mean by the victory being more about the players on the field than the coaches looking on. There was nothing vastly different from Ireland. Except all their good habits were in view. That’s the players doing their jobs, instinctively and accurately.

Of course, the arrival of Andy Farrell was evident in defence. The technique was good, spacing was on point, but the decision-making is about the players. And that’s where they denied South Africa points. Their intent was the root cause of this famous win.

Such intent only comes from belief.

We also saw that earlier in the day in Manchester. The under-20s beat New Zealand hands down. Better coached, better exit strategies from defence, along with phenomenal set-piece work by Andrew Porter and James Ryan in particular.

This pair also made important yardage by carrying in tandem. Just before Ryan was targeted in contact, he would slingshot Porter over the gainline. It was what we normally see from Springbok ball-carriers and Porter’s strength ensured quick ball.

All that said, I wouldn’t hand-pick any of them for senior honours just yet. Even Ryan at 6ft 8in and so clearly a natural leader of men has plenty of development ahead – his performances for Leinster A this season were encouraging but he has lots of work-ons, physically and technically, but that is an exciting prospect.

The 20s did, however, ape their senior colleagues by visualising how they would automatically perform once in the position to beat the Grand Slam or world champions.

That, above all else, is what made this such a special day for Irish rugby. Both teams played without fear in the face of the Springbok or black jersey. My generation brought Ireland past the era of fearing such opponents (without ever beating the All Blacks or winning in South Africa). The current and coming generations are closing the deal now.

Two hoodoos smashed on one memorable Saturday afternoon. Serious progress in what was seemingly a season of backward steps for Irish rugby.

Dublin slip seamlessly into gear as they dispatch Roscommon

3 Dublin slip seamlessly into gear as they dispatch Roscommon

4 Now that Conor McGregor is in Gatsby’s mansion, what will his legacy be?

5 Leicester’s stirring victory a reminder of why football matters

Leicester’s stirring victory a reminder of why football matters 19:55
Meath rally late on against Westmeath to end league drought 19:48
Liverpool goalkeeper Alisson scores last minute winner at West Brom 19:03
Clare up and running with an easy win over Laois 19:01
13-man Waterford survive late stand from Westmeath 17:47
Crossword Get access to over 6,000 interactive crosswords