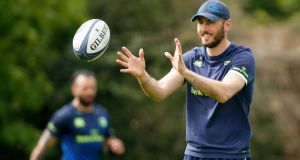 Bath have boosted their coaching set-up with the appointment of attack coach Girvan Dempsey from European champions Leinster.

The former Ireland fullback has worked alongside Stuart Lancaster, Joe Schmidt and Michael Cheika during his three years as attack coach with the Irish province.

Dempsey, who was capped 82 times for Ireland, said: “I’m really looking forward to starting a new chapter in my coaching career. I’ve thoroughly enjoyed my time with Leinster, but I’m excited about what lies ahead with Bath.

“They have a world-class set-up and playing squad. I will be looking to bring my experiences and knowledge to support Todd and the coaching team in delivering success to this great club.”

"Girv and I have been involved with Leinster and Ireland teams together since 1997 and have shared many special memories together," Leinster coach Leo Cullen said on Monday. "The feeling we had together at the final whistle of Saturday's game was one that I will cherish forever.

"Girv's move to Bath is a great opportunity for him to continue his development as a world class coach. We will miss him greatly, but wish him, his wife Ann-Marie and their two boys the very best for the future."