Sexton given a clean bill of health

Outhalf has recovered from bang he suffered against Glasgow 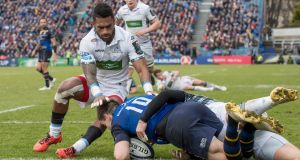 Niko Matawalu collides with Johnny Sexton as the Leinster outhalf scores a try at the RDS. Photograph: Morgan Treacy/Inpho

Leinster have no injury concerns arising from their victory over the Glasgow Warriors for Saturday’s final pool match against French Top 14 leaders Montpellier at the Altrad Stadium.

The Leinster backs coach Girvan Dempsey confirmed that Johnny Sexton had recovered from a bang he received in scoring a try, jarring his neck after being clipped by Warriors’ wing Niko Matawalu. He was replaced by Ross Byrne after 49-minutes.

Leinster have already qualified for the playoffs as pool winners, securing a home quarter-final but are determined to bridge a three season gap to their last victory in France.

Adam Byrne had a small procedure last Friday to resolve an ongoing knee issue. He is not available for the Montpellier match.