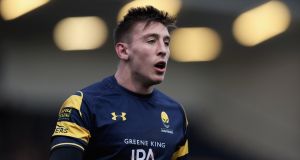 Josh Adams of Worcester Warriors has been named in the Wales squad for the upcoming Six Nations. Photograph: Matthew Lewis/Getty Images

Uncapped duo Josh Adams and James Davies have been named in a 39-man Wales squad for this season’s Six Nations Championship.

Adams has been in prolific try-scoring form for Aviva Premiership club Worcester this season, while Davies — brother of Wales and British and Lions centre Jonathan Davies — has been a consistent performer for the Scarlets.

The squad, announced by the Welsh Rugby Union, also includes the likes of Northampton wing George North and Bath number eight Taulupe Faletau, who are both currently sidelined through injury.

There are no places, though, for Harlequins centre Jamie Roberts or Bath lock Luke Charteris.

Wales kick off their Six Nations campaign against Scotland in Cardiff on February 3rd.

Wales head coach Warren Gatland said: “It is an exciting opportunity for the two new caps.

“James’ form over the last couple of years has been impressive. He is in a competitive area, but we look forward to seeing what he can do.

“For Josh, it’s a great opportunity. He’s been on great form, and the back-three is somewhere we are looking to create depth in.

“We have included a couple of players who are carrying injuries. With Taulupe (Faletau), we are hoping he will be available towards the end of the campaign, and Rhys (Priestland) picked up a knock at the weekend, so we will see where he is at.

“It’s useful to have these experienced guys around camp and to have them included and to work with them.”

Fullback Blair Kinghorn, scrumhalf Nathan Fowles, and props Murray McCallum and D’Arcy Rae were called up with long-serving scrumhalf Greig Laidlaw and lock Richie Gray among those returning to the fold.

Laidlaw, Gray and centre Mark Bennett, who have 142 caps between them, last played for Scotland in the 2017 Six Nations before suffering injury problems.

“We welcome Blair Kinghorn into our group for the first time . . . and also three of our most experienced players in Richie Gray, Greig Laidlaw and Scott Lawson,” Townsend said.

“We are looking forward to working with them and the rest of the squad to ensure that we build on the momentum the players generated in 2017.”

Back-row forward John Barclay will continue to captain Scotland, who will be confident ahead of the tournament after victories over Australia and Samoa in November along with a narrow defeat by New Zealand.