Peter O’Mahony a concern for Munster

Munster captain a doubt for final pool game against Castres 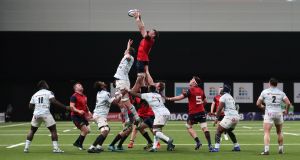 Peter O’Mahony remains Munster’s main and only injury concern ahead of their make-or-break European Champions Cup pool against Castres at Thomond Park on Sunday (kick-off 1pm) although the captain himself and head coach Johann van Graan made confident noises about his availability.

O’Mahony was withdrawn in the 55th minute of Munster’s 34-30 defeat to Racing 92 in the U Arena last Sunday and van Graan admitted: “He won’t train today. He could possibly play at the weekend. We’ll manage him through the week and we’ll see in two days’ time if he’s able to train. I’m hopeful he’ll be captain on Sunday and lead us out at Thomond Park.”

The captain was a little more circumspect himself. “I’m working with the medical staff,” he explained. “I’ve a couple of things to come through. I’ll see how the week goes.”

Other than that, van Graan said the squad had “nothing major” to report, adding: “We came out of the game pretty well.

Munster have added Mike Sherry and Conor Oliver to their European Champions Cup squad, in place of the de-registered ex-Leinster lock Mark Flanagan, who has completed his loan spell and returned to Saracens, and the academy prop Liam O’Connor, who is sidelined for the rest of the season with a knee injury.

Dave O’Callaghan and Dan Goggin are back in full training following their long-term injuries, but Niall Scannell (ribs) continues to be treated by the medical team and Tommy O’Donnell is still undergoing rehab for an AC joint injury. Tyler Bleyendaal (neck) and Jaco Taute (knee) remain long-term absentees.

Ronan O’Mahony suffered no ill effects on his return from long-term injury for Munster ‘A’ in Friday night’s impressive win away to Nottingham in the British and Irish Cup, a game which also marked the return to action of Calvin Nash and Gerbrandt Grobler, who was injured in the pre-season game against Worcester Warriors back in August.

Gerbrandt Grobler, who was injured in the pre-season game against Worcester Warriors back in August, also made a successful return for Munster A. Van Graan was asked if the recent coverage of the contentious acquisition of Grobler, who has served a two-year ban for a positive drugs test in February 2015, had changed his opinion of Munster’s decision to sign him on a one-year contract last July, before van Graan succeeded Rassie Erasmus.

“Not really. (I have) Nothing more to comment on that. He’s served his ban and Munster stand behind him.”

Asked if Grobler’s signing had sent a wrong message to their academy and could damage the Munster identity, Van Graan said: “I don’t want to comment at this stage.”