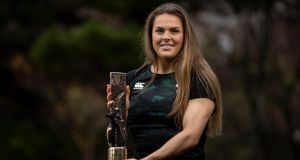 Béibhinn Parsons with her award after being named Guinness Rugby Writers of Ireland Women’s Player of The Year. Photograph: Morgan Treacy/Inpho

Garry Ringrose has been named the Guinness Rugby Writers of Ireland Men’s Player of The Year in recognition of excellent form throughout the 2019-20 season, thus completing a clean sweep after winning both the Irish and Leinster Players’ Player of the Year awards.

Béibhinn Parsons was awarded the Women’s Player of The Year. The Ballinasloe winger capped off an eye-catching breakthrough campaign by scoring three tries during the 2020 Women’s Six Nations.

“It’s a nice honour to pick up anything like this. It’s pretty cool,” said Ringrose. “It feels a little bit weird because it’s probably for rugby that was played for what feels like a while ago as a consequence of Covid and all.”

Ringrose, who turns 26 next week, has been bedevilled by injuries, fracturing his jaw in the rearranged game against Italy last October and again on his reutrn in Leinster’s win over Northampton last month.

“Thankfully there was no displacement. It was just a matter of letting the bone heal, which was a big bonus. It meant the injury was a lot shorter and I didn’t have to go through an operation. It was just unlucky, but thankfully it wasn’t as bad as the previous one.”

Reacquainted with prescribed supplement drinks and his mum’s blended meals, Ringrose began eating solid foods again a week ago and returned to training this week. Although Saturday’s Munster-Leinster game has come too soon, he’s hopeful of being available for the Six Nations opener against Wales a fortnight hence.

“I know I have to hit a few markers this week to be able to be available but it’s just on that edge. Unless things go horribly wrong this week I’d like to consider myself to be available for selection going forward.”

The late Garrett Fitzgerald, longtime Munster chief executive, Jordan Conroy, Louise Galvin, Leinster and Ballynahinch were among the other recipients of awards.

Another Richarlison goal as Everton win at West Brom 20:16
Woods tells police he did not know what caused car crash 19:57
Envoi Allen settling in well after move to Henry de Bromhead’s yard 19:11
Schumacher name gives me motivation every day, says Mick 16:46
Andy Farrell doesn’t know yet if he’ll be with Lions or Ireland this summer 15:46
Crossword Get access to over 6,000 interactive crosswords