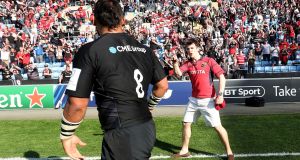 Saracens man of the match Billy Vunipola is confronted by a Munster fan after his side’s victory in the Heineken Champions Cup semi-final at the Ricoh Arena. Photograph: Dan Sheridan/Inpho

It would be interesting to know what debate took place behind the cameras that resulted in handing Billy Vunipola the man of the match award.

In one sense it was a reaffirmation that sport and politics and religion and brazen homophobia from previous days should not interfere with what happens on a rugby pitch.

In another forum questions will be asked on whether rugby has learned anything or even really cared in the first place. Owen Farrell or Liam Williams could just have easily won the award with no quibble. But the panel on BT Sport chose Vunipola, who liked a message on social media by Australian star Israel Folau saying “hell awaits” homosexuals unless they “repent their sins and turn to God”.

One thing that was clear is that when Vunipola strutted around the pitch after the match celebrating Saracens’ win, Munster fans were not pleased. And they made up the vast majority of the 16,235 crowd.

When Vunipola was clapped off the pitch by Saracens fans, Munster fans joined in with a chorus of booing. There was a gay pride flag on show. Cultural borders had been drawn.

Afterwards a question directed at Munster coach Johann Van Graan about the Munster fan who confronted Vunipola on the pitch was closed down before he could say anything. His answer would have been interesting as Van Graan is a devout Christian. The Munster coach is an unusually civil man and has never said anything offensive.

“We’re not going to be talking about Munster supporters that we didn’t see,” the Munster press officer explained. “We’ll keep it to the rugby, we didn’t even see that, we’re not going to comment on that. We don’t even know if this could be a Saracens fan wearing a Munster jersey, we don’t know anything about it, sorry. We’ll skip that.”

Saracens director of rugby Mark McCall, considered the issue a thing of the past which was dealt with by the club and is now a closed case.

But he could hardly avoid the optics. Selecting Vunipola as best player reinforced the message that homophobia was not so bad. It put him on a pedestal, strengthened the notion of a role model, a player to be admired and it linked the competition sponsors Heineken with an individual whose words many found deeply offensive.

It is difficult to believe that the decision was made without first considering some of the consequences or what people offended by his remarks might make of it.

Vunipola was asked about the controversy in two questions on television as he stepped up to receive his award. He did not resile from his earlier position. He did not flinch. He did not demur from his hard held views or appear contrite.

“I felt a lot of love, a lot of kindness was shown to me. From my point of view there was no intention to hurt anyone. I believe in what I believe in,” he said focussing on the opprobrium directed at him following his message.

“Man was made for woman to procreate that was the goal no?” he had said. That post was liked by 8,843 people.

Now there are as many questions as answers. At what point do intolerant religious views collide with incitement to hatred. Where does the notion of freedom of expression become a stick to beat a minority group and why in the thinking of Folau and Vunipola does that freedom not come with social responsibility.

To that backdrop the image of the weekend was of the lone Munster fan racing up the touchline from the stewards after his peaceful protest, a broad grin across his face, an older generation with their red shirts behind cheering every step.

At least not all of rugby failed to get it.