Johnny Watterson at the Ricoh Arena 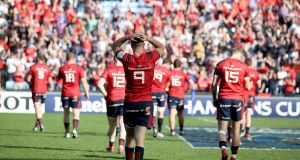 Conor Murray and his dejected Munster team-mates after the defeat to Saracens at the Ricoh Arena, Coventry. Photograph: Dan Sheridan/Inpho

A scoreline reflecting a match that went only one way. Munster will do what they always do, lick their wounds and think of how to get better for Connacht this week.

Afterwards, coach Johann van Graan’s mod was reflective, his thoughts drifting towards not wanting to get better, but having to if Munster are to beat what has become a curse that now extends to their last seven European semi-finals stretching back to the 2008-09 season when Leinster went through 25-7.

One of the take aways is that Saracens won almost every facet of the game and stood up to Munster’s set piece. In the way they went about their business they have become the benchmark of excellence that Munster once were. To get back to that level Van Graan may need to recruit.

The cutting edge of the missing Joey Carbery and Keith Earls aside, what Saracens’ two tries and kicking demonstration by Owen Farrell, who landed eight out of nine, suggests is that the Munster squad needs fortifying. But that won’t happen, at least not in the short term.

“I believe we do need to improve. If we are just going to say this is good enough then we are not in the right job,” said Van Graan. “At this stage it is this group again.

“Obviously, with the World Cup coming, you might get some short-term solutions if there are injuries and a lot of guys at the World Cup. But, we as a group have said we’re going to stick together. That’s why all of our big players re-signed. We believe in the plan.”

Mark McCall and his Saracens squad began by dropping high balls on the Munster defence, where Mike Haley struggled. An early miss led to a penalty after two minutes. Saracens would not relinquish the lead after that.

While Munster got to 3-3 through Tyler Bleyendaal and just before half-time drew level again at 9-9, it was to be the high watermark. Just after the break the pressure on Munster and the territorial and possession advantage began to cause fractures, with Munster scrambling to defend their line.

John Ryan committed to a tackle leaving the narrowest of gaps, which flanker Mike Rhodes galloped through for the first try. The dyke then burst and Saracens washed over Munster.

“We literally didn’t have the ball in the first half, not because we didn’t want to but because they kept bombing aerial bomb after aerial bomb at us,” said Van Graan. “If you play with their mass and their width they force turnovers.”

That they did with Mako and Billy Vunipola, Maro Itoje and Jamie George their centre of gravity. Of the eight matches won by Saracens so far Itoje, Mako Vunipola and George have won man of the match awards twice, Brad Barritt and Saturday’s winner Billy Vunipola, who was booed by Munster fans with each earth shaking carry, once each.

Farrell added two more penalties on 47 and 54 minutes bringing his kicking to seven from seven and his side’s lead to 25-9. Darren Sweetnam showed pace and commitment to streak into the Saracens corner to get the crowd to their feet just after the hour with JJ Hanrahan converting. But as if to hammer it home who the match belonged to, Saracens immediately snatched the momentum back with David Strettle’s cutting run down the right drawing Munster bodies across the pitch.

In the scramble Billy Vunipola barrelled in on 72 minutes with Farrell again obliging from the tee for 32-16 and a place in the European final, their third in four years. Munster could only look on and in a strange way admire the complete team Saracens have become.

Nobody knows what another day out against McCall’s Saracens side might bring. But in the manner of the win the realisation was that Munster were chasing a level that was, in the warm sunshine of the Ricoh Arena, out of their range.

“Walking through the changing room, you could see what it meant to everybody involved and the management,” said Van Graan.

“In sport, you put your heart into everything that you do and when you don’t get the result it’s hard to take. Obviously Joey and Keith are two of our world class players that didn’t play today. But I’m not going to use that as an excuse.

“It’s so important to get the message across, we want to win Europe,” added the coach looking ahead. But for now he was stuck in the present.

“We’ve just got to do it step by step. I can’t emphasise enough, last season there were one or two things we could have done better. But today we were beaten by the better team.”