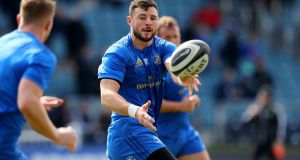 Leinster centre Robbie Henshaw Henshaw adds so much to their defence, and their go-forward ball. Photograph: Ryan Byrne/Inpho

Uneasy lies the crown? So goes the theory anyway, and that the Heineken Champions Cup is a particularly tough cup to retain. Until 2012, only Leicester had achieved back-to-back titles, in 2001 and 2002, but Leinster having retained the trophy in 2012, Toulon duly won three in a row and Saracens two in a row before Leinster returned to the summit last season. In other words, it’s suddenly become more commonplace.

Yet, furthermore, the prevailing view seems to be Leinster haven’t been anything like as compelling as last season, save for their three bonus-point wins at home in the pool stages against Wasps, Bath and Toulouse, and Wasps away.

Admittedly, that almost sounds like a variation on “what have the Romans ever done for us?”

But in addition to the defeat away to Toulouse and hard-earned wins away to Bath and then especially so in the quarter-final against Ulster, the champions seem to lack the momentum and cohesion they possessed at the same juncture last season when they’d ruthlessly dethroned Saracens in the quarter-final.

As bulk suppliers to Team Ireland, they perhaps suffered more than the other provinces post the Six Nations. They also come into this game on the back of a draw and losing at home to Benetton and Glasgow, and, for the fourth week running, make wholesale changes. Akin to last week, their opponents make only three changes from the side which beat Clermont 47-44 last week, and are on a run of just two defeats in their last 23 games.

One of those losses, at the RDS in January, provides a template for Leinster, by frustrating Toulouse through the accuracy of their carries and clearing out, and without risking passes or offloads in making it loose.

The defeat in Toulouse in October was thus a tacit lesson in how not to play the rejuvenated French outfit, when both of Maxime Médard’s pitch-length tries emanated from intercepts, from an offload and long pass. With an abundance of speed and footwork in Antoine Dupont, Sofitane Guitoune, Cheslin Kolbe and co, they’re lethal when transitioning from defence to attack, and as they showed when down to 14 men against Racing, are fearless with it.

In October, Toulouse also slowed and pilfered Leinster at the breakdown, where Wayne Barnes – again the referee today – permitted all manner of illegality, and ignored the offside line.

Toulouse also have much improved set-pieces, and in restoring Pita Ahki’s bulk to midfield and Joe Tekori in a beefy backrow, are clearly intent on upping their physicality from last January’s meeting. Another indicator is that 6-2 bench.

Leinster may not be able to boss this game quite like that one. While their supporters will be delighted to see Johnny Sexton, James Lowe, Devin Toner and Robbie Henshaw back in harness, last week’s game was the first in 10 weeks for the latter two.

This is also Sexton’s first game in five weeks and first for Leinster since December, while it will be merely the fifth time this season the Sexton-Henshaw-Garry Ringrose axis will line out together, and the first time since that Toulouse defeat in October.

Yet, class is class, and Sexton and Henshaw have previously shown their ability to shake off any rust after absences. Henshaw adds so much to their defence, and their go-forward ball.

For all the gnashing of teeth, the dual champions have earned another home semi-final, and come full-time they could be within three games of completing a remarkable back-to-back double. Hence, this one could ultimately be seen as season defining. Furthermore, that quarter-final win over Ulster was their 14th consecutive win at home in the Champions Cup, and seven of those have been at their home from home.

They can do this.

1 Waterford turn Kilkenny upside down and inside out
2 Once in a blue moon: Cavan’s overnight success 15 years in the making
3 Jim McGuinness: There is a way to save championship and make it competitive
4 Waterford’s frenzied waves of attacks too much for Kilkenny
5 Ireland’s work-ons: Four things Andy Farrell needs to address
Real news has value SUBSCRIBE