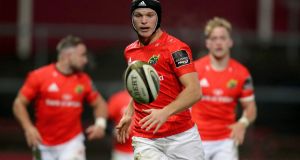 For the Munster backs at least, and especially Tyler Bleyendaal, the arrival of Stephen Larkham was like the Pied Piper landing in Limerick. They all came running to hear what the 100-plus times capped Australian outhalf was going to play.

For Bleyendaal, who is a strong contender to start this weekend against Ospreys as both injured Joey Carbery and JJ Hanrahan are expected to be unavailable, it was like revisiting childhood.

Larkham was the Wallaby playmaker the Kiwi grew up watching. An ability to get the Australian backline moving and to slide through gaps made the converted fullback a World Cup winner.

“When the news came that he was going to coach Munster it was pretty awesome, to be honest,” says Bleyendaal. “He would have been a player I’d have watched growing up. He was in a pretty great Wallabies team.

“He’s been a successful coach as well, he’s just come in and he’s a pretty unassuming guy but he gets to the point. He has almost given the whole team freedom and understanding of what we are trying to do.”

Without Munster patience and support, the 29-year-old would never have been in the position to learn from Larkham or Johann van Graan. His delayed arrival in 2015 because of an injury was to cause further complications in 2017.

It required considerable mental strength to bounce back and also a belief that all would be well – well enough at least to put his head into rucks and tackles without double-guessing if his rugby career was to be the very definition of reckless self-endangerment.

It’s all gone well so far so I was delighted with that, and I was never really at a point where I was going to throw it in

“I must be extremely stubborn or something, to be honest, because I don’t know, if you give it too much thought, you kinda do wonder,” he says. “I love the game and I guess I’m very privileged to be able to play and I really enjoy my time with Munster.”

It wasn’t always like that, especially the second time around, and sometimes he might have had thoughts to walk away and not have to deal with the medical complications.

“I guess you do, but then my first choice is always to keep playing. You never once thought, ‘I’m going to give this up, it’s too hard.’ It was just, medical staff, ‘is it possible? Yes, it’s possible,’ and, ‘right, let’s get stuck into the rehab.’

“It’s all gone well so far so I was delighted with that, and I was never really at a point where I was going to throw it in.

“There’s a process to go through and maybe if the rehab didn’t go so well or if the injury didn’t recover, then that’s a thought that you have to go down. But for me there was an option to rehab, to get the neck right, and from there it’s all been positive, so I never had to get to that point where I thought I had to give it up.”

There is a strong team priority about Bleyendaal’s thinking. He says, “You put the team first and make decisions from there.” Yes, everyone says that, but it’s in his conviction. It’s also an asset that van Graan, who rarely fails to comment on players’ character as much as their rugby ability, respects about his outhalf.

In Bleyendaal, the coach recognises the downplaying of the seriousness of his neck surgery.

“He is a courageous man,” says van Graan. “I don’t think people always understand what it means to have a neck injury and go in for surgery and then to actually come back.

“You have actually got to see within the group to see what massive influence he has in the club. A few years ago he was our player of the season. He is one of our leaders. Certain small things, the way he embraced Joey Carbery when Joey came in last year.

“The way that he and JJ Hanrahan worked together at the start of the season, each having two games, two games, two games. He has got big dreams for himself. He has a young family now. He is just a fantastic individual, absolute pleasure to coach him.”

For an outhalf who is not his first pick, high praise.