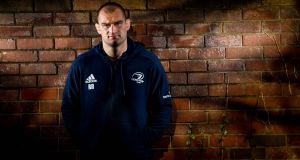 Leinster’s Rhys Ruddock: ‘I had my week of feeling sorry for myself and mulling things over.’ Photograph: Morgan Treacy/Inpho

The sorrowful mysteries: “Agony in the Garden. Ten Hail Mary’s. Glory be… Oh, my Jesus… Second Sorrowful Mystery: The Scourging at the Pillar. Scripture: Then Pilate took Jesus and had him flogged.”

It seems all the players have been through it. Rhys Ruddock is no exception. Like everything in rugby there is a process. But already they have put their disappointment through the mental grinder and packaged Japan in sealed containers. The imperatives of a new European Champions Cup and more fear of failure and hunger for success is colouring this week’s landscape.

A broad stroke synopsis: Ruddock had a good World Cup, could have had more game time. Returned frustrated and “wouldn’t be comfortable sharing” with us his conversations in Japan with Joe Schmidt.

In Leinster it’s a different kind of excitement, more familiar and without the country wide attention there was for the World Cup run. But there is also a self-healing rule of thumb in that if you don’t want to move on the sport will do it for you.

“To be honest, coming back you’re really carrying around that disappointment,” says Ruddock. “Obviously everyone put a lot of work in. Getting back and not being in the environment here, sitting at home mulling things over was a pretty tough time.

“But you always know you’ll have that day when we come back in here, back into the environment and have a new focus. A game on the weekend to look forward to will be a huge lift for me personally. I had my week of feeling sorry for myself and mulling things over.”

Leinster have a particular issue of transition in that 14 players were named in Schmidt’s original squad. With Sean Cronin and Jack Conan out injured and others such as Devin Toner, Dave Kearney and Fergus McFadden overlooked, it’s far from a “normal” run into a Champions Cup weekend.

In 2015 a disappointed Ireland came home from their final World Cup match in Cardiff’s Principality Stadium, where Argentina won 43-20 in the quarter-finals. A few weeks later Leinster lost 6-33 to Wasps, who ran in three tries in the RDS in the first round of the Champions Cup. That year the three-times winners did not make it into the knockout phase.

Leinster have won six in a row in the Pro14 league and Benetton are not Wasps, who lost that year in the semi-final to eventual winners Saracens. But caution might not be a bad thing this time around and Ruddock is primed to reach into the hurt locker.

“From experience, any time you have a disappointment and anything that hurts that much, you’ll always take learnings from it and you’ll always carry it around with you a bit in games,” he says. “And it will give you a bit of an extra edge.

“So, as disappointing as things were, to be able to use it as fuel to become a better player and make you do everything you can to get some success in the future can be a positive.

“I don’t think anyone was carrying the disappointment into the building and dragging people down. I hope people would tell us if we were but you come in and I think you pick up on the environment and the atmosphere in the building and the people walking around. That positive and energy has worn off on us.”

It has to have or Leinster’s European campaign could be badly broken before Christmas as they face into a huge bloc of five weeks incorporating four European Cup matches. They face Lyon away followed by Benetton. There is then a Pro14 match against Glasgow before playing Northampton Saints back to back, the first of those in Franklin’s Gardens.

“The focus is massively on what’s ahead of us here in Leinster which is probably a bloc, unlike anything I would have experienced in the past,” says Ruddock unwilling to be sucked into anything Andy Farrell has lined up later this month.

“It is going to come thick and fast,” he adds. “It is no time to be looking that far ahead or at what’s down the road with Ireland.”