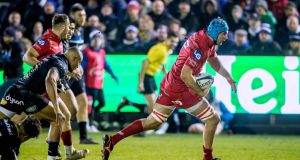 Tadhg Beirne breaks away to score Scarlets’ first try in the Champions Cup game against Bath at The Recreation Ground. Photograph: Morgan Treacy/Inpho

Bath’s European Champions Cup quarter-final hopes suffered a crushing setback as the Scarlets cut them to shreds at the Recreation Ground.

The Welsh team’s spectacular 35-17 bonus-point victory sets them up for a potential Pool Five decider against three-time European champions Toulon next weekend.

Bath, though, are facing being frozen out of the last-eight picture after their red-hot opponents ran in tries by Irish lock Tadhg Beirne, wing Paul Asquith and Wales international centres Scott Williams and Hadleigh Parkes.

England head coach Eddie Jones looked on as the 1998 European champions came horribly unstuck, but Bath could have no complaints on a night when the Scarlets dominated every key area.

They moved top of their group, and a quarter-final place will be secured if they see off Toulon at Parc-y-Scarlets in eight days’ time.

Priestland, who kicked all of Bath’s points when they beat the Scarlets in west Wales three months ago, departed just four minutes into the contest and was replaced by Burns.

And Bath were behind their posts just eight minutes later, left reeling by a stunning Scarlets attack that fullback Rhys Patchell started inside his own 22.

Jones added the conversion as Scarlets served immediate notice of their renowned attacking prowess that drove them to last season’s Guinness Pro 12 title.

England flanker Sam Underhill, making his first appearance for two months following prolonged concussion symptoms, was prominent in Bath’s attempts to wipe out the deficit, before Burns opened their account through a 22nd-minute penalty.

But the Scarlets were untroubled by his departure, rocking Bath on their heels again as they claimed a second try when Patchell moved possession wide, Parkes acted as the link and Asquith crossed unopposed in the corner.

Bath did not know what had hit them, and it got worse nine minutes before half-time – and with Barclay still off – when scrumhalf Gareth Davies sprinted through a huge gap following an attacking Scarlets lineout and support runner Parkes finished off between the posts.

Jones’s conversion made it 19-3 and the outhalf then kicked a penalty following a Bath scrummaging offence, with the home side trooping off at half-time after being taught a lesson in terms of ambition, creativity and running rugby.

Williams claimed Scarlets’ fourth try 11 minutes into the second period, collecting Patchell’s cleverly placed kick to score, and although Banahan’s acrobatic catch and finish for a touchdown that Burns converted cut Bath’s arrears to 19 points, they were still way off the pace.

Another Jones penalty took the Scarlets past 30 points and, despite Bath belatedly stirring through Mercer’s touchdown, it was a case of way too little, too late as the Welsh side comfortably closed out a comprehensive success.