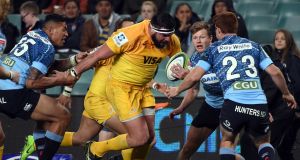 Stade Francais prop Ramiro Herrera is the only European-based player in Argentina’s provisional squad of 38 players for their end-of-season matches in the northern hemisphere, the country’s rugby union said on Wednesday.

Uncapped props Lucio Sordoni and Mayco Vivas were included to bolster the frontrow stocks in Tests against Ireland, France and Scotland.

Experienced prop Nahuel Tetaz Chaparro was left out after he had shoulder surgery last week.

Argentina relaxed slightly their policy of only selecting home-based players for the Rugby Championship, with Herrera and Saracens prop Juan Figallo among those who helped them record two wins for the first time since they joined the tournament in 2012.

However, coach Mario Ledesma appears reluctant to abandon the policy wholesale and stuck with home-based players, most of whom play for Super Rugby side Jaguares.

The squad will be cut to 30 before they depart on November 3rd with matches against Ireland in Dublin on November 10th, France in Lille a week later and then Edinburgh at Murrayfield on November 24th.

A final game against the Barbarians at Twickenham will round out the tour on December 1st.

Scrumhalf Jake Gordon and loose forward Angus Cottrell, an unused squad member for the final Rugby Championship matches against South Africa and Argentina, are the other uncapped players.

The October 27th match is a dead rubber after the All Blacks sealed the annual trans-Tasman series with wins in Sydney and Auckland.

Queensland centre Samu Kerevi makes his return after missing the Rugby Championship with a bicep injury.

The 25-year-old’s last match was the third Test against Ireland in June. Reece Hodge has started at outside centre in all six games in his absence.

Centre Tevita Kuridrani has been left out as he continues his recovery from a pectoral muscle injury sustained in July, allowing another chance for seven-Test Sefa Naivalu, who played his last match against Italy in June, 2017.

But loose forward Jack Dempsey has been included after missing the entire season with a serious hamstring injury.

England-based hooker Tatafu Polota-Nau and inside centre Matt Toomua have been omitted, with the match falling outside the international window.

As expected, flanker Lukhan Tui was also left out, having announced on social media on Sunday that he had withdrawn himself from selection to look after his family after the death of his step-father.

The Wallabies will have a training camp in Japan and pick their squad for the European tour, where they play Wales, Italy and England, after the All Blacks game.