Connacht braced for a difficult assignment 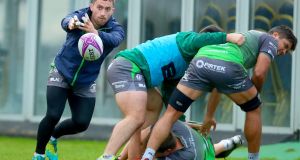 Scrumhalf Caolan Blade takes over the captaincy for the first time as Connacht face Sale at the AJ Bell Stadium. Photograph: Oisin Keniry/Inpho

Connacht will be trying to reclaim the driving seat from Sale when the two teams meet at the AJ Bell Stadium today (3pm).

Steve Diamond’s squad grabbed the European Challenge Cup opening day plaudits with a bonus point 41-24 over Perpignan in France, and Connacht are preparing for a tough outing.

“We know it’s going to be a difficult environment over there,” says Connacht coach Andy Friend. “We are aware if we win, we put ourselves in a healthy spot. Similarly if we lose, it doesn’t mean we’ve lost it. So, we know it’s an important game, and our job is to make sure we come back in the driving seat.”

Friend has made seven changes this week, two of whom are Eagles players, who made their debuts in last weekend’s 22-10 win over Bordeaux-Begles

Rested are the experienced quartet, outhalf Jack Carty, internationals Bundee Aki, and Quinn Roux, and captain Jarrad Butler. And in come the two rookies, Conor Fiztgerald at outhalf and Colm de Buitlear on the wing.

Kyle Godwin moves into 12 to partner Tom Farell, and there is a return for the experienced Tiernan O’Halloran at fullback. In the pack Denis Buckley adds steel to the scrum, replacing the injured Peter McCabe, Ultan Dillane starts for Roux, and Paul Boyle takes on the blindside.

Scrumhalf Caolan Blade takes over the captaincy for the first time, while new signing David Horwitz, who has been out of action with a hamstring since the start of the season, is in line for his first appearance, having featured for the Eagles last weekend.

“We have picked a side we think can win the game and that is our intention,” Friend says. “We have a few new players coming in who are there on merit, and then we have a few more experienced guys coming back from injury.”

“We are going to be challenged again this weekend because we have new combinations coming up, so that is the challenge, to gel as best we can and make sure we get that one shot, one kill.”

Although former Connacht outhalf AJ McGinty is unavailable with a shoulder injury, Diamond has boosted his Sale squad with the return of internationals Chris Ashton and James O’Connor in the backs, and Bryn Evans and Ben Curry up front.