Disciplinary hearing on Friday night resulted in the club receiving a fine of €50,000 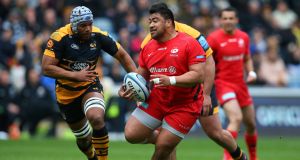 Titi Lamositele played in the Champions Cup despite being ineligible. Photo: Getty Images

Saracens have been fined €50,000 – €25,000 of which is suspended until the end of the 2020/21 season – following a disciplinary hearing in London last evening arising from the club fielding an ineligible player in the Champions Cup, round six match against Racing 92.

Saracens had informed EPCR earlier this week that one of their established players, USA international Titi Lamositele, who was named in the matchday squad, and who came on to the field of play as a replacement in the 60th minute of the fixture at Allianz Park, may have been ineligible due an inadvertent administrative error on behalf of the club.

EPCR decided to bring a misconduct complaint against Saracens and the complaint was heard by an independent disciplinary committee consisting of Roger Morris (Wales), Pamela Woodman (Scotland) and Jean-Noel Couraud of France.

The committee considered submissions from the EPCR Disciplinary Officer, Liam McTiernan, from the Saracens chairman, Neil Golding, and from the club’s legal representative, Paul Harris QC.

The committee heard that Lamositele was eligible for the fixture against Racing 92 when Saracens announced their matchday squad on Friday, January 17th. It was also explained that between the time of the matchday squad announcement and the match itself on Sunday, January 19th, Lamositele’s work permit expired and that Saracens were not aware of this due to an administrative oversight.

The committee accepted that Lamositele’s work permit had expired unbeknownst to the club, and that Saracens had not sought to gain any unfair advantage by selecting the player.

The Committee then decided to uphold the misconduct complaint as Saracens had breached EPCR’s disciplinary rules, and a fine of €50,000 was imposed on the club.

Saracens could have faced elimination from the competition had the committee opted to deduct match points as was the case when French club Grenoble were punished for fielding an ineligible player against London Welsh in the 2012-’13 Challenge Cup. Had the Racing result been overturned Saracens would have missed out on the chance to play Leinster in the quarter-finals.