England ready for chaos on and off the pitch in Scotland 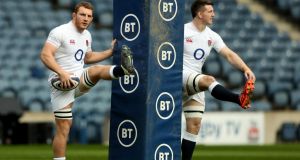 Kick-off: 4.45pm. Venue: Murrayfield. How to follow: The Irish Times liveblog will begin at 4.15pm. On TV: Live on Virgin Media One and BBC.

England are bracing themselves for chaos on and off the pitch as they seek to breathe life into their Six Nations campaign and reclaim the Calcutta Cup.

Defence coach John Mitchell sounded the warning that England would be “ready for anything” as they attempt to defeat Scotland for the first time in three years, but the potential distractions continued to mount.

The UK’s strongest storm since 2012 is due to hit Edinburgh on Saturday afternoon, while on Friday it emerged the European Champions Cup organisers were investigating Saracens for fielding an ineligible player. On Friday night they held a disciplinary hearing to consider potential sanctions – including throwing Saracens out of the tournament.

With six Saracens players in the England XV and another on the bench it was hardly ideal preparation on the eve of a match they must win to keep their championship hopes alive.

Eddie Jones’s side were already anticipating a rough ride at Murrayfield, with the England head coach describing Scotland as a “niggly, goading” side and memories of a fracas in the tunnel in 2018 still fresh. Going back further, a group of bagpipers blocked the way to the England dressing room in 2012.

Sam Underhill first tasted this fixture two years ago coming off the bench, but swiftly earning himself a yellow card as Scotland went on to clinch a 25-13 victory.

Underhill admitted that after a lacklustre performance against France last time out “the pressure is on”, but had a note of caution for the 10 members of England’s 23-man squad preparing for a Murrayfield Test for the first time.

“It was one of my first caps and first experience here at Murrayfield. It was probably my first insight into the emotion of the occasion, and I was probably a bit naive to it before, getting booed off the bus and seeing the reaction of the Scotland players when they won, seeing the crowd and how much it means to everyone up here,” said Underhill, who has a Scottish grandmother from the Borders.

“It’s definitely something to acknowledge and it’s definitely there – you can’t ignore it – especially when it’s as loud as Murrayfield is.

“It’s good to have a bit of an edge to a game. Sports in general and rugby definitely, a few people have probably thought it’s gone away from those rivalries and what underlies them, but having that edge is definitely a good thing for the game.”

England raced into a 31-0 lead at Twickenham last year but found themselves 38-31 down after Finn Russell inspired a thrilling Scotland comeback, only for a late George Ford try to salvage a draw. Russell is still out of the picture for Scotland, but England are equally wary of Adam Hastings’s mercurial talents and his ability to spark his side’s attack into life.

“I think you can learn a lot from previous internationals,” said Mitchell. “Everyone has slight trends and tendencies. The game has become extremely unstructured, so it’s important to be able to adapt in that chaos. That’s something that we want to get better at, and something that we’re focused on in our preparation.”

The Six Nations organisers and the Scottish Rugby Union are continuing to closely monitor Storm Ciara, with gusts of 50m/ph expected in Edinburgh.

The Scotland captain Stuart Hogg believes his side will have a few “tricks up their sleeve” , but Mitchell is adamant England can cope with the expected conditions.

“I think we’re ready for anything,” he added. “That’s certainly in our preparation. We’ve looked at all situations that could occur and weather is certainly one of those. It’s important for us to be adaptable in those situations. I’m not sure who it will favour. Certainly both teams will have to adapt to it. Should it come then it’s adapting to what it presents in each of the halves.”

Jonny May, meanwhile, has admitted he does not know where he will be playing next season with his Leicester contract up in the summer. May moved to fifth on the list of all-time England try-scorers with two stunning individual efforts against France, but faces a pay cut if he wants to stay at Welford Road because of salary cap constraints.

“I don’t think ‘oh, I’m out of contract so I need to try a bit harder.’ Nobody knows what I’m going to do yet because I don’t. We’re playing Scotland, and I swear to you, everything I’m doing is focused on being the best I can be. ”

1 Philip Browne admits funding model for Irish rugby is not sustainable
2 BBC to show four live Premier League games as restart set for June 17th
3 Dr Bob Rotella: ‘If you focus only on the target you’ll play darn good golf’
4 Coming fourth in the Olympics didn’t change this fearless quartet, time did
5 Dave Hannigan: Trump gets the clubs back out as death toll keeps rising
Real news has value SUBSCRIBE