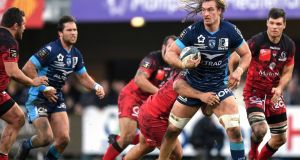 Montpellier v Newcastle Falcons
GGL stadium (1.0, Irish time, live on BT Sport)
The Falcons produced a memorable finish to pickpocket the French club at the death when the sides met in Newcastle earlier in the tournament but Montpellier are strong favourites to reverse that result with a team that includes Ruan Pienaar, one of several high-profile South Africans. Newcastle include former Ireland Under-20 international Brett Connon on the bench.

Bath v Wasps
Recreation Ground (3.15, live on BT Sport)
Both teams are short of a plethora of front-line players for a match that will have no material impact on Pool 1 as neither can qualify. Bath have chosen to name Springbok international Francois Louw among the replacements even in the absence of the injured Sam Underhill. Given the manner both teams like to play it should be entertaining, with the home side slightly favoured to shade it.

Scarlets v Leicester Tigers
Parc y Scarlets (5.30, live on BT Sport)
The Scarlets’ form has been patchy in recent times and it certainly hasn’t been helped by a raft of injuries to back five players in the pack. Wales hooker Ken Owens is once again asked to play in the backrow and will captain the side from number eight. Jonathan Davies is an absentee. The Tigers have one of the best young players in England in Jordan Olowofela on a wing and should be competitive given the respective teams.

Toulon v Edinburgh
Stade Felix Mayol (5.30, Irish time, live on BT Sport)
The three-time champions Toulon have been massive underachievers in Europe this season based on their playing roster alone and include a home defeat to Newcastle. Edinburgh lead the way in the pool and could lay down a massive statement if they could find a way to win against opponents with little to play for in the greater scheme of things.

Exeter Chiefs v Castres Olympique
Sandy Park (1.0, live on BT Sport)
In by far the most competitive pool this is a must-win game for both teams as they continue their pursuit of Munster and a place in the knockout stages of the competition. The Chiefs welcome back England international Jack Nowell following a hamstring injury sustained with England in November. Irish pair Gareth Steenson and Ian Whitten are named among the replacements. Castres have named a strong side but Exeter should be good enough to win this one ahead of their trip to Limerick next weekend.

Glasgow Warriors v Cardiff Blues
Scotstoun (3.15, live on BT Sport)
Glasgow will be hoping to clamber their way out of what has been a mini-slump in the Guinness Pro14 of late that has seen them overtaken by Munster at the top of the Conference A. They make 11 changes from the side beaten by Benetton last weekend as they try to maintain their pursuit of Saracens at the top of Pool 3. The Blues have nothing to play for ostensibly but it will be a poignant occasion as Tom James plays his first game since 2017, sidelined because of depression, and hooker Matthew Rees is another long-term absentee who returns. Glasgow, despite recent travails have to pick up a bonus-point win.

Lyon v Saracens
Matmut stadium de Gerland (3.15, Irish time, live on BT Sport)
Maro Itoje returns following a five-match absence due to a knee injury sustained while on England duty while hooker Jamie George and flanker Jackson Wray are the other changes up front. New Zealand-born Scottish international Sean Maitland replaces Dave Strettle on the wing with the latter dropping to the replacements. Lyon are without a point in the tournament to date but they have still selected a strong side. Pride will be a significant factor for the home side but they look overmatched.