Harlequins do Ulster a huge favour as Wasps collapse 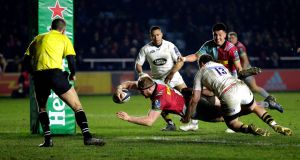 Ulster’s chances of progressing to the knockout stages of the Champions Cup received a massive boost on Saturday evening as Wasps threw away a 21-0 lead and with it their European hopes.

Ulster travel to Wasps in next weekend’s final round of fixtures and while the home side can still mathematically qualify, realistically their chances went up in smoke at the Stoop.

James Haskell was sent off for a flattening Jamie Roberts with a shoulder-high challenge in the 76th minute that was also late, receiving a straight red card from referee Roman Poite and ending the groggy Wales centre’s afternoon. The England flanker faces a suspension that could affect his availability for the Six Nations, but his more immediate concern will be Wasps’ implosion.

Leading 21-0 after 30 minutes, they leaked a succession of tries, grabbed the bonus point, before falling apart once again as touch downs from Danny Care, Elia Elia and James Chisholm completed a remarkable fightback by Quins.

Harlequins’ interest in Europe was extinguished long ago - they had lost all four previous matches of this season’s group phase - but a team weakened by injury and suspension fought to the end and were rewarded. It was the 80th minute when man of the match Chisholm picked and drove over from close range as shell-shocked Wasps rubbed their eyes in disbelief at having thrown the game away.

Mathematically they can still qualify for the knock-out phase, but they face mission impossible against pool leaders Ulster at the Ricoh Arena next weekend to progress.

An uneventful first quarter came alive in the 17th minute when Wasps attacked from a line-out and were rewarded by crossing several phases later. Drives from Haskell and Jake Cooper-Woolley sent Quins backwards before quick hands by Willie le Roux and Thomas Young enabled Kyle Eastmond to accelerate over the whitewash.

Wasps struck for a second time three minutes later when Care and the superb James Lang spilt the ball between them, enabling a counter-attack that saw Nizaam Carr run 60 metres to cross. Both tries had been scored with Quins prop Lewis Boyce in the sin-bin for tackling Ashley Johnson without the ball and it was the Wasps hooker who touched down for the third.

Route one was the path over the line this time, Joe Launchbury catching the line-out ball as the prelude to a drive that ended when Johnson grounded the ball.

Quins took advantage of a broken field to begin their response, Lang punting ahead for Ross Chisholm to win the foot race and score. The match was now finely poised and when Care set-off from a five-metre scrum, delaying his pass for Lang to skip over, the home side were over for a second.

Quins’ fightback was interrupted 14 minutes after half-time and once again a lineout provided the platform for the undoing. Young carried into the heart of the defence and with gaps appearing out wide Danny Cipriani was able to send Brendan Macken through a gap to seal the bonus point.

Christian Wade performed a try-saving tackle on Tim Visser but the pressure continued to build through a succession of short-range drives that were completed when Care burrowed over.

All the momentum was with Harlequins and with replacement outhalf Marcus Smith orchestrating play brilliantly, they claimed their fourth try that started with Visser’s break inside and finished when Smith sent Elia over with a long floated pass. And Wasps’ fate was sealed when James Chisholm drove across the whitewash with seconds to spare.