Connacht bring the big guns back for trip to Worcester 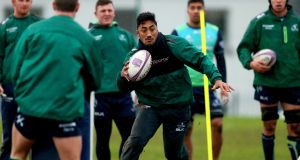 Bundee Aki starts for Connacht as they look to secure top spot in their Challenge Cup pool. Photograph: James Crombie/Inpho

A win for Connacht would secure top spot in pool five of European rugby’s second tier competition and a place in the quarter-finals with a game to spare. Kieran Keane’s men host Oyonnax in the final round next week.

With James Cannon ruled out through injury, Dillane’s return will be a boost to the Connacht pack which includes loosehead Peter McCabe, who made his first start against Munster, and Conor Carey at tighthead.

In the back row, Eoghan Masterson returns at blindside flanker having been rested last week. Captain John Muldoon, who started in Connacht’s last victory in Sixways back in 2009, starts at number eight.

Scrumhalf Kieran Marmion comes back in to form a refreshed halfback pairing with Craig Ronaldson, as Jack Carty is rested from the matchday 23 after a hectic Christmas schedule. The backline is also boosted by Aki’s return in midfield where he will play alongside Tom Farrell.

The back three includes Tiernan O’Halloran at fullback and Darragh Leader and Niyi Adeolokun on the wings. Cian Kelleher is listed among the replacements having returned from injury this week.

Forwards coach Jimmy Duffy has spoken of Connacht’s desire to extend their four-match winning run in Europe this season, stating: “There is a lot of energy after last weekend, but one thing we are really pleased with is that guys who were given opportunities during the interpros really took them.

“So, it casts a different light over selection, and it means we are having longer selection meetings and that is the space we are in. We have performed really well in Europe this season and we’ve given ourselves a great chance of advancing in the competition, but the job is not done yet.

“We’re well aware of the threat posed by Worcester and where their strengths lie. We’re targeting a home quarter-final, which would be a massive occasion in the Sportsground. We have two games left in the pool stages and we need to win both to be guaranteed that home quarter-final.”