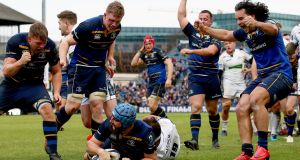 Leinster’s Scott Fardy scores a try during the Champions Cup game against Glasgow Warriors at the RDS. Photograph: Tommy Dickson/Inpho

The aesthetics of victory were arguably as pleasing as the material gain that confirmed Leinster as pool winners with a round of matches still to be played and also confirming that the Irish province will enjoy a home quarter-final in the playoffs next April.

Eight tries underlined their superiority against a Glasgow Warriors team that didn’t travel with their full complement of internationals. There were a handful of milestones too for the home supporters to celebrate, Scott Fardy scoring his first tries for Leinster; James Lowe crowning his European debut for the province by touching down in the second half; and replacement hooker Bryan Byrne making a Champions Cup bow.

It wasn’t just the ‘newbies’ that caught the eye. Robbie Henshaw, captain, Isa Nacewa – crossing for two tries – and Jonathan Sexton controlled the game brilliantly while scrumhalf Luke McGrath provided an industrious and effective link when not making the odd break of his own. Henshaw’s facility to switch between the two centre positions and still produce high-calibre displays speaks volumes for his ability.

Leinster’s lineout maul was also a potent attacking weapon that complemented the panache with which the cut their opponents to shreds out wide. The pack provided the platform, front-foot, quick ball that gave time and space, and when required were happy to hammer it up on the fringes. To a man they can be pleased with individual and collective contributions.

Leinster tried to get Lowe and Jordan Larmour working in tandem in the outside channels and there were glimpses of the havoc that the dynamic duo will potentially inflict going forward. Leinster coach Leo Cullen might have the odd cavil, discipline occasionally an issue, and the odd questionable decision, but they’re only minor when weighed against the overall performance.

Glasgow travelled without players like Stuart Hogg, Finn Russell, Jonny Gray and Zander Fagerson, to name four, and while they showed flashes of the form that marks them as an excellent team, they lacked the capacity to seriously inconvenience the home side, limited to the odd cameo, usually involving Niko Matawalu.

Cullen will be pleased with some decent performances off the bench and Ross Byrne deserves a mention both for his distribution and place-kicking.

Glasgow dominated the opening six minutes, initially when Leinster failed to deal with the kick-off, and this allowed them to pitch camp in the home side’s 22. Earnest in their intent, the Scottish side were undone by a couple of handling errors.

Leinster scrambled effectively in defence and then on seven minutes struck for the first of four tries in the opening half. Glasgow conceded a free-kick and then a penalty that saw them lose 70 metres and from this platform the home side flexed their attacking muscles for the first time.

Nacewa and Robbie Henshaw crashed the ball up and then from a third consecutive ruck, Jordi Murphy, partially obscured, timed his run cleverly to take Luke McGrath’s pop pass, break a tackle and canter under the posts. Sexton’s conversion gave Leinster an ideal start.

It was to be an eventful opening quarter for Murphy as three minutes later he was sent to the sin bin. Glasgow won a penalty about 12 metres from the Leinster line, scrumhalf Ali Price took a quick tap and Murphy brought him down in a double tackle with Devin Toner. It was debatable as to how far Price had travelled but referee Marius Mitrea reached for his pocket.

The home side survived a couple of scrums, a five-metre lineout but a little indiscipline handed the initiative back to Glasgow and they eventually scored a try through wing Matawalu as Leinster over-folded and the Fijian was able to check and dance inside the tackle of Josh van der Flier and Luke McGrath. The visitors’ play merited the score, which Peter Horne improved upon.

Leinster’s response was eloquent, reclaiming the lead within four minutes. Toner caught a lineout, the pack rumbled 15 metres, Sexton slipped an inside pass to Nacewa, who cut back against the grain, profiting from a defender slipping to race under posts. Sexton tagged on the conversion to make it 14-7.

Sexton posted a penalty and then much to the delight of the home supporters Larmour and Lowe were encouraged to give free rein to their prodigious attacking prowess. The New Zealander, in particular, was proving a real handful. Leinster’s lineout maul had been excellent, racking up the metres and from that platform, the home side grabbed a third try. Ironically it was probably the messiest set and drive but Seán Cronin had the presence of mind to release the ball when tackled get up and stretch for the line.

Leinster escaped their 22 from a neat Lowe break and even though Glasgow managed to snuff out the threat initially, a loose clearance gave possession straight back in the form of Larmour. He beat the first tackler, linked with Lowe, the halfbacks McGrath and Sexton both handled and when the latter was tackled just short of the line, McGrath popped the ball to the unmarked Fardy and the Australian dived over for his first Leinster try.

On 38 minutes Lowe was again a catalyst for another try. Scampering away down the touchline, the timing and weight of his inside pass to Sexton was delightful as was the outhalf’s line of running, demonstrating enough pace and strength to touch down in the corner, while taking a clip on the head for his pains.

Leading 34-7 at half-time with a bonus-point vouchsafed, Cullen could afford to start removing some of the marquee names; six of the starting team were gone before the game reached the final quarter including Sexton and Henshaw, both of whom has excellent games and soon after by the outstanding Luke McGrath, a deserved man-of-the-match, for which there was several candidates.

The proliferation of changes was always going to bring a disjointed element to the game and that was perhaps evident in some of the tries after half-time. Glasgow grabbed a couple, Matawalu’s second and another from number eight Adam Ashe, while to the delight of the home supporters, captain Nacewa crossed for a second as did Fardy, another player who produced a top-class display.

Arguably the loudest acclamation came when Lowe marked the landmark with a typically muscular finish, taking two tacklers over the line after running onto Nacewa’s nicely judged pass. Ross Byrne struck the ball beautifully from the tee, adding three conversions as the home side breached the half-century mark in points and with the victory the guarantee of a home quarter-final in the Champions Cup.