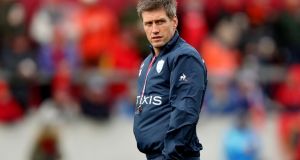 Racing 92 assistant coach Ronan O’Gara: “We need to get more stability, build our base and get more consistent performances.” Photograph: Bryan Keane/Inpho

He knows what to expect better than anyone, all the more so having been back here with Racing last January, and having again been granted more influence for this return to the ground he has graced as well as anyone ever has.

So it was that Ronan O’Gara could sum up last Saturday’s titanic arm wrestle so succinctly.

“We broke. We cracked first. That is what happened.” And this, of course, is generally what Munster made opponents do, all the more so here. “Of course. Incessant pressure. That is what it is all about. Pressure.”

Munster’s work rate, adds O’Gara, has to be the basic level that you expect from Munster. That is their strength. They have such passion and desire to play for each other. And that is the basic ingredient of Munster rugby. The lads really care about each other, they care about their families, and playing for the public and it is a fantastic place to play. That is a basic requirement now when you put on the jersey. So that does not surprise me one bit.”

Conditions dictated much of what unfolded on Saturday, in an 80 minute battle for inches across the gain line, which makes definitive judgments on Munster’s previous efforts to broaden their attacking game more difficult. Yet even so, O’Gara’s observations of the current Munster team came with a caveat.

“In the Pro14 they have a gameplan that will steamroller a lot of teams but we saw when they got to Scarlets and Saracens last season, that the gameplan didn’t work, so that was my message to the players this week that basically you have to stand up to them. Don’t let these guys steamroller you because they can do that. And you could see the try they got, it happened because their work rate was insane. They kept pummelling us. That happened once in the 80 minutes so it was really hard to play.”

“But look, Zeebs was brilliant all night,” adds O’Gara referring to Simon Zebo, whose abilities have made Racing his main French suitor. “That offload behind the back was just fantastic to see. Darren Sweetnam, Earlys and Conway are hungry. They want the ball. There is a bit of indecision about who is playing ‘10’ and when they decide that, that will help the team greatly.”

In any event, Racing are clearly contenders in a near reprise of last year’s pool, when they lost five of six games, having overcome their hangover from winning the French Championship (and reaching the European Champions Cup final) in the 2015-2016 season.

“I think a lot comes down to the fact we did not cope well with success,” O’Gara says of last season. “After that, it is blatantly obvious. We had four days pre-season whereas this year we have had a good run at it. The Lyon game at home was a hammer blow. We played well against Clermont away and La Rochelle away, we did very well, but lost by one score. Last week was a point left behind for those of you who watched the game up close. Leicester, we had opportunities to score three or four tries and we just did not take them and when you look at the group now, it is six [points], six, five,” says O’Gara of the three-way tussle between Leicester, Munster and Racing

“It is cup rugby,” O’Gara notes and adds that Racing need to emulate the Irish sides in getting their attitude right for the European Cup. “We have to prepare for every game the way the Irish provinces prepare for Europe. That is where they excel, they peak for these games, especially their home ones. It is a fantastic competition.

“With ten minutes to go I’d bite your hand off for a point, but after 60 I thought the game was there to be won and the first score – even if it was three points – was going to be a big score, but we just didn’t mentally break them,” adds O’Gara.

“Not many teams get a losing bonus point here. I know it’s not the Munster of old. I think if you stand up to Munster’s physicality you’ve a chance. But tonight was hard because conditions were difficult to put two or three passes together.

“They’re good at the high ball; they’ve an edge on a lot of teams on that. But to finish the game strongly shows great character. And sometimes that’s what adversity is about, showing character. We’re close, yet we’re far away. We need to get more stability, build our base and get more consistent performances.

“I heard Castres got smashed. So they’ve a draw and a defeat. I’m sure they’ll front up when we go to them for the next French derby so it would be handy if they sort of lay down a bit and we were able to win those two games. It would make for an interesting January from our point of view.

“The great thing is we’re going for it. Europe means a lot to and we’ll be fronting up on both fronts.”