Gerry Thornley: La Rochelle a breath of fresh air in every sense 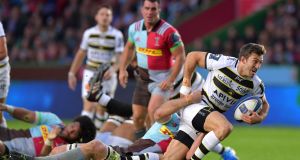 On the opening weekend that was, there was something old, something new, and something blue. Of all the statements of intent, none was more ominous than Saracens’ 57-13 win away to Northampton to start their quest for three European Champions Cups in a row.

But none was more eye-catching than La Rochelle’s irreverent debut in the competition courtesy of a 34-27 win away to Harlequins.

To put Leinster’s 24-17 win over Montpellier into perspective, these three sides were the only ones to register try-scoring bonus points in the opening 10 matches. Leinster were the only side to do so at home.

Their five-point haul was the finest affirmation yet that Leinster have the best production line of home-grown talent of any professional team in Europe, and it looked all the better after Exeter beat Glasgow without either of them obtaining a bonus point. In such a brute of a pool, a solitary point here or there could ultimately prove critical.

Viewed in that context, Racing’s 22-18 win over Leicester, even though the Tigers grabbed a bonus point, could have been a worse outcome from Munster’s perspective. After all, Racing had their third try by the 28th minute.

That said, with that offloading machine Leone Nakarawa leading the way, Racing looked liberated in that first half compared to their relatively desultory form last season in Europe and this season in the Top 14. Of their 23 offloads, Nakarawa made ten of them.

Leicester also look like being a tougher proposition under Matt O’Connor this season. They haven’t won away in Europe since beating Munster at Thomond Park in December 2015, but that bonus point defeat in Paris was a marked improvement on their embarrassing sojourns away last season, when losing 42-13 to Glasgow, 38-0 to Munster and 34-3 to Racing, not to mention signing off with a 43-0 home defeat to Glasgow.

The signing of Tongan number eight Sione Kalamafone (who made 13 carries against Racing) from Gloucester to inject some more ballast into a hard-carrying back row looks a shrewd piece of business as, of course, are the acquisitions of English Grand Slam-winning outhalf George Ford and winger Jonny May, who scored his seventh try in seven matches.

Although Ulster showed plenty of character as well as the cutting edge provided by the Jacob Stockdale-Charles Piatau double act to come through against Wasps, the latter looked there for the taking, and at their best Ulster would have added a bonus point.

As Les Kiss readily accepted, they will have to produce their best performance of the season to overcome La Rochelle’s heady mix of power up front and pace and footwork throughout their back line.

The team from the lovely port city in the Bay of Biscay are a breath of fresh air, in every sense. They are not a big-city club backed by a multi-millionaire owner, rather a well-run club who have the longest serving president of any club in the Top 14, Vincent Merling, a former backrow with the club, like his son, and who has presided over the club for over 20 years.

They have about 800 partners or sponsors, and about the same again in patrons, who between them all contribute about €9 million per annum. Their merchandising, which generated €500,000 three seasons ago, reached over €2 million last season.

Promoted from the ProD2 in 2014, they reached their first French Championship semi-finals last season after they topped the Top 14 over 26 games, finishing a full seven points clear of Clermont, and while unbeaten at home, also won seven of 13 on the road. Even in their six defeats, La Rochelle picked up bonus points in all but one of them. Nothing about their form this season suggests they were a one-season wonder.

Under a well-travelled former prop Patrice Collazo and the ex-Toulouse and France utility back Xavier Garbajosa, they play about the most ambitious brand of rugby in the French Championship.

They can be hot and cold, commit the most turnovers, but will have a go from anywhere, as they showed with that length-of-the-field try against Quins on Saturday which the outstanding centre Geoffrey Doumayrou finished.

It’s doubtful any other French side (and a good few English ones as well) would have gambled on the well-travelled Ryan Lamb other than La Rochelle. They don’t pay top dollar for stellar signings, preferring players such as number eight Victor Vito, last season’s Player of the Season in the Top 14 and fellow All Black Jason Eaton.

Las Rochelle have over 10,000 season ticket holders and the three-year upgrade of the Stade Marcel-Deflandre, with an entirely enclosed 16,000 capacity, new rugby academy and shops, was completed in September.

The ground opens around five hours before kick-off, and the gates stay open just as long afterwards. Next Sunday’s visit of Ulster will be their 25th sell-out in a row.

In 20 home games since the start of last season, they have lost once, to Gloucester in the Challenge Cup semi-finals. With Leinster due to face an in-form Glasgow side effectively already playing for their lives, it’s clear that while the opening round was an encouraging one for the Irish teams, they all face even tougher examinations in round two.