Munster chisel out victory over Racing in an old-school bruiser 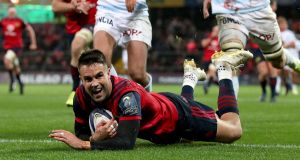 Cometh the hour, cometh the man. After 60 scoreless minutes, Conor Murray’s charge down and alert finish broke the deadlock, and a feverishly worked team try finished off by Andrew Conway appeared to have also broken Racing’s muscular resistance, but Munster allowed the Parisians in for a bonus point and were relieved to hang on for the win a the end.

A bruising, physical game battled out unremittingly across the gainline was made for Racing’s juggernaut, so in that context it was a praiseworthy win for Munster, but as one suspects might be true of this pool, it went to the wire.

Leicester’s bonus-point win leaves them ahead of Munster on six points before they go toe-to-toe and back-to-back yet again this December, while Racing are still very much in the frame, just a point further adrift. One hard-earned away win might go a long way towards settling this group.

On a day, and an evening, when you wouldn’t have put the cat out, virtually all of the 22,054 in attendance vociferously stayed with and encouraged the home team over the line. Munster club rugby was formed on days like this.

Ultimately, their discipline until a costly flurry of penalties near the end made the count 11-8 in their favour overall, was critical, as was their bravery and work-rate, making 150 tackles to Racing’s 84, not least in resisting Racing and the elements in a scoreless first half. Most of those were made by the Munster pack, who from David Kilcoyne, who had a huge 77 minutes, and Rhys Marshall, to Tommy O’Donnell and the unstinting Peter O’Mahony and CJ Stander, had big games.

It wasn’t pretty, rather it was brutally hard yakka, with Munster making the game’s only line break, and four of the game’s five offloads. Playing into the first-half elements, Munster should have had some reward for a strong first quarter, but to reach the interval after a scoreless first half was the better outcome for them.

In the face of Racing’s battering ram tactics, Munster put up a fairly solid red wall, with good line speed and hard, aggressive tackling. They also double-teamed Leone Nakarawa – with one going low and another high – to limit Octopussy’s famed offloading game. He only had one in the match.

That said, he applied huge pressure to the Munster lineout, which lost six of their 18 throws.

Munster were helped by Dan Carter clearly not being right. Carter kicked off, and after Murray’s box kick into the teeth of the wind found touch barely 10 metres upfield, Racing signalled their intent with a sequence of pick-and-jams before Carter went for a little grubber, delayed it, and his right knee collided painfully with Chris Farrell. He winced and was heavily bandaged before carrying on.

Munster survived some intense pressure from the Racing pack at a defensive lineout and scrum to exit through Murray’s good touchfinder. Meanwhile, Carter wasn’t having the happiest of starts. A second poor kick out of hand was compounded by going beyond the ball at the ensuing ruck.

After Ian Keatley found a good grubber, he then twice kicked penalties up the line, as anything in excess of 40 metres into the wind was out of range.

However, after one drive was illegally held up just short of the line, an over throw by Marshall and then a knock-on by O’Donnell – hindered by teammates blocking the view of Keatley’s skip pass – obliged Simon Zebo to cover Pat Lambie’s kick down field with a very good touchfinder.

To underline the scrappiness of the opening exchanges, both sides were applying good pressure on the opposition throw, and next it was Nakarawa’s turn to knock on Camille Chat’s notoriously wobbly throws, before Ben Tameifuna conceded Racing’s fourth penalty at the scrum.

Twice in a row though, Nakarawa again disrupted the Marshall throw. However, Racing remained pinned back after O’Donnell pounced on a loose ball and wisely eschewed an offload – instead deciding the ground was his friend – and then Henry Chavancy knocked on Carter’s casual pass under pressure from Rory Scannell.

From the scrum, Earls made a good carry but after a passage of one-off carries earned another penalty, Murray curiously opted for a quick tap when three points would have rewarded all Munster’s hard work. Again they struggled to clear out quickly from close-in carries before Bernard Le Roux won a relieving penalty over the ball from Billy Holland’s pass.

When Earls lost his support when countering and Murray re-loaded for the offload, Scannell knocked on Keatley’s pass to give Racing an attacking scrum 30 metres out.

When Nakarawa offloaded to Carter, it required a double tackle on the great man to prevent a try-scoring offload. On Racing went through 19 phases, with double tackles preventing Nakarawa from getting the ball away in the tackle again.

The resistance was typified by big hits on Wenceslas Lauret by Murray and Kilcoyne, the second forcing a spillage, but when Murray went blind to Zebo he was tackled into touch. O’Donnell put in a good hit on Carter from a Racing scrum, before Chat fumbled at the base. Stander carried superbly off the Munster scrum, only for JP Doyle to block Murray’s intended pass to Zebo before, next time round, Scannell found a relieving touch.

This was hard yakka for nil-nil, but the crowd were well into it, not least when Marshall juggled in holding on superbly to an intercept, only for Jean Kleyn to tackle Nakarawa in the air. Help came by way of Chat’s crooked throw, only for Kleyn to breach one of the new rules by kicking ruck ball. Carter found no distance with his penalty to touch, and as the rain pelted and swirled around the ground, Racing’s battering ram tactics yielded only a few inches here and there before Lauret ran into Chavancy.

The half ended with Tameifuna flopping to the ground to concede a second scrum penalty, and although Stander conceded an indirect penalty for joining the lineout before Marshall’s throw, Carter kicked the penalty over the touchline.

Munster skipped off the happier of the two.

Maxime Machenaud’s box kick to touch on the resumption into the wind was an exact replica’s of Murray’s in the first half.

A clever variation saw Keatley expose space beyond Lambie, who managed to tackle Sweetnam into touch. Although Marshall’s throw was picked off by Le Roux, but after a good counter by Sweetnam, Keatley found a superb 50-metre touch, only for Machenaud to find touch on half-way.

Playing with an advantage when O’Mahony was hauled down at the line-out, Zebo latched onto Keatley’s chip and passed around his back to Earls. Alas, he couldn’t hold on. Had he done so, it would have been a try for the ages, repeated for years and decades to come.

Instead, helped by impact off the bench, Racing earned an attacking throw when Dimitri Szarzewski counter rucked after Zebo fielded a long kick and Munster were penalised for hands in the ruck.

Instead, Munster derived the emotional energy when they twice counter drove Racing’s mauls towards the line, before Racing ponderously, and illegally, set up another maul. A knock-on by Szarzewski helped Munster too. Before Andrew Conway, on for Sweetnam, emulated him when taking Murray’s box kick, but when Keatley went to look wide, Farrell’s run blocked the pass to Zebo, which the fullback then knocked on.

An hour gone, and it was still scoreless.

But not for much longer.

When Machenaud went blind and looked to kick downfield from Antonie Claassen’s feed off the base of the scrum, his low punt was charged down by Murray, ricocheting off his chest. There was no one at home as the ball rolled into the Racing 22, and Murray composed himself to gather the greasy pill short of the line and roll over it for the breakthrough try.

From wide out, with Marshall holding the ball on the tee, Keatley landed an astonishing conversion.

Racing reacted angrily to conceding a scrum penalty, feeding the energy of home team and crowd alike. Suddenly the tempo lifted. Kevin O’Byrne, on for his European debut, threw long for Keatley to latch onto the ball at full speed. Farrell made his best carry, but after Szarzewski was pinged for not rolling away, Keatley missed a penalty from 25 metres out in front of the posts. It turned into a good miss. He atoned somewhat with a touchfinder to the corner, pinging Racing onto their own line.

When Machenaud’s box kick afforded Munster a lineout on the 22, Murray’s strength kept the move alive. On they patiently went through the phases, support players latching onto the one-off carriers to good effect none more so than when O’Donnell helped drive Kilcoyne on in his carry.

Keatley stepped in at scrumhalf, and Zebo and Scannell moved the ball on for Conway to stand up Fijian Albert Vulivuli and finish out wide. Illogically and astonishingly, Keatley landed the conversion from the right touchline.

But when in a position to turn the screw Murray kicked out on the full and a couple of needless penalties, it gave Racing a power play off another lineout drive. Recycling quickly, eventually Nakarawa plunged over, and Teddy Iribaren’s conversion made it 14-7.

Derby day delight as Man United stop City in their tracks 18:53
Jürgen Klopp says Liverpool aren’t lacking hunger to win 18:32
Benzema strikes late to earn Real Madrid a point at Atlético 17:59
Here is your handy guide to sport on television this week 17:01
Sam Bennett on top again as he takes Paris-Nice first stage 16:55
Crossword Get access to over 6,000 interactive crosswords