Munster and Castres can’t be separated in scrappy stalemate 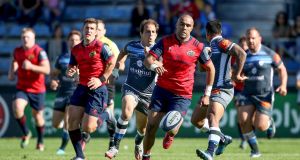 Fitting end to a chaotic affair. The match officials, in their innate wisdom, decreed that Munster replacement Robin Copeland legally slapped the ball from scrumhalf Rory Kockott’s grasp in the game’s penultimate attack.

“If you touch the guy’s arm it wouldn’t be a penalty because you are allowed to do that,” Rassie Erasmus explained. “If you slap the ball it would have to be a penalty.”

The action was deemed a knock-on, and Castres scrum, so Copeland had to have touched the ball.

“I was really nervous it would be a penalty,” Erasmus added, “if he slapped the ball we were lucky.”

That luck won’t hold across a long season, certainly without a gaggle of locks or considering Johann van Graan must somehow fill the void left by the imminent departure of Erasmus and Jacques Nienaber.

With the clock in red, Castres duly went through the phases on Munster’s 22 before Kockott offered Benjamin Urdapilleta a drop at goal to win it. The punchy outhalf was miles wide so two poor looking teams shook hands and went home.

Despite some encouraging individual performances, Munster’s lack of quality and strength in depth is increasingly evident.

Racing 92 and Ronan O’Gara arrive in Limerick next weekend to shine a brighter light on their multiple short-comings. Castres are far from contenders.

The beginning of the end for the all too brief Erasmus experience has begun and the team appear to be already regressing. With Felix Jones and Jerry Flannery taking control of the warmup, Erasmus spent seven minutes on this breezy yet very warm Sunday afternoon watching Castres go through their pre-match routine. Munster were not flogging themselves, understandably, while the French used those last few exchanges to get their usual rhythm flowing.

They remain a vicious animal at home. Erasmus knew exactly what was coming and must have relayed as much before his players reappeared for kick-off.

Not that it mattered. Munster were reeling when Conor Murray was correctly sin binned after just five minutes.

Urdapilleta loves a grubber in behind and seeing Peter O’Mahony in his face, he gave Yannick Caballero a clear run to the line. Murray gambled and hand tripped the flanker before the ball was re-gathered.

The scoreboard didn’t immediately reflect the advantage. No, that came via a gift from Chris Farrell to South African centre Robert Ebersohn a good 60 metres out the field. Munster survived the initial onslaught when Tommy O’Donnell intercepted near his try line but with Tyler Bleyendaal now at scrumhalf they seemed rudderless.

As in last week’s defeat to Leinster they continued to cough up sloppy penalties yet Murray returned with only 7-0 on the board.

Munster had shown signs of life but Niall Scannell missed his intended target at a key lineout and the hooker fumbled possession in a driving maul.

The younger brother, Rory Scannell, was doing a better job in his continually impressive auditions for the Ireland 12 jersey. Scannell junior has literally expanded into a fine player, making some defensively crucial plays to keep midfield glued together.

Munster did get going on 29 minutes when Kockott should have followed his fellow scrumhalf to the bin. English referee Matthew Carley went easy on the South African French international despite blatant murder of Munster possession a yard from the Castres line. The next lineout saw O’Donnell, then Dave Kilcoyne, torpedoed at the blue wall before Rory Scannell’s clever outside to in running line allowed Murray to put Simon Zebo over unharmed. Scannell was hammered but it was worth it as Bleyendaal’s conversion leveled matters.

The status quo lasted three minutes. Kockott was at the hub of everything Castres did, first putting Uruguayan captain Rodrigo Capo Ortega tramping over the gainline. Rory Scannell hauled him down but Kockott’s rapid mind ensured that Julien Dulmora strode over.

But Munster were alive now and Murray’s constant probing should have been rewarded with a try. They settled for Bleyendaal kicking three points with the numerical advantage swinging their way as Ebersohn was yellow carded.

The South African centre returned to a scoreline that had the sleepy natives awfully restless. Murray was at the heart of it all. The scrum conundrum was, according to Carley, going Munster’s way. When Zebo almost stretched over the Castres line Murray was aware of the advantage and threw a Hail Mary pass (into touch). The Castres defence, almost to a man, took a breather so Murray tapped quickly and sent the energetic Kilcoyne bowling over.

Bleyendaal put the visitors 17-14 up but Urdapilleta, again within three minutes, squared it up with a penalty after Murray was clearly offside at a scrum.

The result seemed destined to be decided by the superior halfback combination.

On 58 minutes Ian Keatley arrived for Bleyendaal. Just as Kockott had a try disallowed because Murray guided his foot into touch.

Next came a Munster scrum but before Murray could feed the ball Carley blew for a free kick. CJ Stander yelled for another quick tap but Keatley took over and launched a garryowen instead. Maama Vaipulu caught it, slid past Stander and galloped 40 metres. The huge Tongan number eight was stopped but, by some miracle, another Castres foot in touch kept matters at 17-all.

Another scrum penalty gave Keatley a chance, from 50 metres, to put Munster ahead. He missed.

More chances came their way but an inability to remain error free as attacking phases touched double figures meant the gate was left wide open for Urdapilleta to snatch victory from the arms of mediocrity.

Kilcoyne was penalised at a late breakdown but the Castres kicker hit the upright as matters ticked into the 80th minute.