Time for Munster’s young guns to earn their spurs 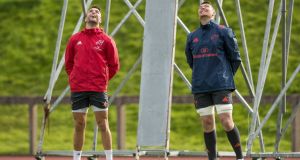 Munster will not be long finding out how much trouble they are in. They have just lost, comprehensively enough, to Leinster in Dublin. This is the worst possible time to be visiting Castres’s all but impregnable commune.

Jean Kleyn must have broken down since Rassie Erasmus said on Tuesday they would push the South African lock back into the team. New signing Gerbrandt Grobler is also on ice. Darren O’Shea, 24 now, is another denied his big chance due to injury. Donnacha Ryan, also injured, returns to Limerick next weekend with Racing 92.

Leinster invested plenty of time in Mark Flanagan before cutting him loose in 2013. The Westmeath man and Billy Holland need to make impact comparable to a time when Munster built an empire upon the shoulders of Paul O’Connell and Donncha O’Callaghan. Nobody wants to be slogging past their sell-by date but the 38-year-old O’Callaghan is the Worcester Warriors club captain.

When Erasmus departs – sooner rather than later now that Johann van Graan has been appointed – Tyler Bleyendaal will be offered up as the starting number 10. This is stated fact; Erasmus said whoever wears the jersey this weekend is the main man.

That is one very tough decision for a gifted 25-year-old Kerry outhalf to swallow. You come home. You get fit. You play outhalf against Leinster. You take the kicks. You travel to Swansea with the dirt trackers. Welcome to the Layer Cake, JJ.

Much can change in a week. If, as Erasmus forewarned, Rodrigo Capo Ortega and the other Castres bulls are stamping their hooves with steam rising off their backs – “They spend two, three minutes at one spot. Resetting and resetting and when they get it going they get a massive scrum going.” – then Munster could sink into southern French manure without a trace.

John Ryan and Robin Copeland have been dropped for the job not done by the Munster tight five against Leinster. It was also reinforced last Saturday that Peter O’Mahony and CJ Stander cannot carry this pack on their own. Nobody should be questioning their endeavour, but their ability is under serious review.

Simon Zebo returns to fullback, with Darren Sweetnam dislodging Andrew Conway from the right wing, but any activity past Conor Murray will be irrelevant if the Lions scrumhalf is forced to fumble with a greasy pill.

Castres, it should be noted, are very beatable. They are zero from four on the road in the Top 14 and Montpellier sacked Stade Pierre Fabre in September, albeit with a monstrous cadre of Springboks and Georgians in their vanguard.

Munster do not arrive with comparable power. They can still win, and should do, so long as they handle the delicate little kicks general Rory Kockott puts in behind them, and don’t get splintered up front.

Here’s a seminal moment in the careers of Stephen Archer, Flanagan, Niall Scannell and Dave Kilcoyne. Deliver in the south of France like those who wore the jersey before them and Munster can squeeze out victory.

So long as Bleyendaal proves himself the right man, and takes the precious points offered to the soon-to-be-Irish-qualified outhalf.