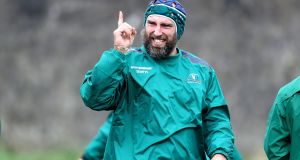 Momentum is the key word in Connacht’s vocabulary this week as they change focus with a novel visit to Switzerland.

French opponents Oyonnax will cross the border for only the second European fixture in the Stade de Geneve, some 10 years after cup champions Munster overcame Bourgoin to qualify for the knock-out stages.

Different competition today, but Connacht’s qualification for the quarter-finals in this season’s Challenge Cup is pretty much non-negotiable for the Irish province. And with Top 14 strugglers Oyonnax and Brive, and premiership basement boys Worcester also in pool five, a ninth qualification in this competition should be well within Connacht’s capabilities.

Oyonnax and Connacht have both endured poor starts to the domestic season – one win from seven for the Top 14 side, the last two defeats at home – and one from six for Kieran Keane’s Connacht.

“We want to keep our heads to the grindstone, and keep improving,” says Keane. “We are not too far away from a win, I hope, but Oyonnax are in a similar situation to us, so I don’t think it will be an open, friendly game.”

French sides traditionally put greater emphasis on their own championship, particularly those trying to avoid relegation, and Oyonnax are unlikely to be any different. They have opted to give six academy players an opportunity this evening, with only three players remaining from their recent 16-19 defeat at home to Pau in the championship.

Oyonnax have played only twice in this competition, in 203/14 and 14/15, but enjoyed some notable success over Sale Sharks, Zebre, and this season’s pool opponents Brive. In contrast Connacht could be regarded as the doyens of the Challenge Cup, having reached the knock-out stages on eight occasions and the semi-finals three times.

While that should be attainable this season, coach Keane is not taking anything for granted, and has named his strongest possible starting XV, giving enforced rest to some players, notably Bundee Aki “having played the full 80 in all six of Connacht’s games so far this season”.

Prop Denis Buckley and outhalf Jack Carty take a break, replaced by the former Grenoble prop Denis Coulson and Andrew Deegan, in only his second start with the club, while Kieran Marmion moves to the bench. Darragh Leader replaces the injured Tiernan O’Halloran at fullback, while Eoin Griffin joins Tom Farrell in a new centre partnership.

“Some of our more high-profile players are getting up in minutes, so we have to manage the squad, but it’s a way of taking the pressure off perhaps in some areas. We can shuffle the deck a little bit, which creates opportunities for different people,” said Keane.

“We are not looking too far ahead. We have stuttered our way through the early part of the season, finding out about each other, so we are just trying to get momentum.”

While Connacht would rather be playing Champions Cup rugby, having lost the play-off to Northampton last season, the Challenge Cup is a competition the club has traditionally relished. More importantly it represents a real route to gain impetus, which should translate into an opening day win.