Kieran Keane thrilled as Connacht rise to the challenge 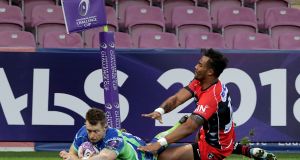 It was the performance and the result Kieran Keane craved and Connacht needed – a five-try bonus-point winning start to their European campaign after several weeks of frustrating Pro 14 defeats.

Not one without mistakes, but it was an emphatic win. Leaving the Stade de Geneve there was a deserved pep in Connacht’s step as they return to the Sportsground this week to host fellow Challenge Cup pool five winners Worcester.

“Really pleased, a long time coming,” says coach Kieran Keane. “It’s great for us, a new competition the Challenge Cup, gives us another aspiration. We are disappointed about our narrow losses obviously, but you can’t turn it back, so looking forward is what we are all about.

“The challenge is for us to back it up. The changing room was indicative, a noisy little session, nobody with their heads down – that is the momentum we were searching for, so foolish not to make use of it.”

Connacht also made use of the 30,000-seater stadium’s artificial playing surface to up the pace against a more physical Oyonnax side. And although there were a couple of hiccups in the opening half, Connacht took control of the second 40 minutes, kept their opponents scoreless and finished with a flourish.

“We back our fitness and our willingness to move the ball about, it was an obvious tactic to use here, and it paid off pretty handsomely.

“We took the foot off the throat a little, and they did come back, but I felt personally good we had control of the game. We were a bit frenetic late in the first half and things got a little loose, but we were able to regroup, identify at half-time, calm the boys down and away they went again.”

Although Oyonnax had opened with an early penalty, Connacht’s riposte was swift as captain John Muldoon wasted no time in taking a quick throw-in, allowing outhalf Andrew Deegan to burst through midfield and several hands later Tom Farrell supplied left wing Matt Healy who crossed in the right corner, with Deegan adding the extras.

They added a second seven minutes later when Eoin Griffin sent Cian Kelleher through in the right corner. When flanker Eoin McKeon epitomised the pack’s work ethic, crashing over for the third try after 23 minutes, Deegan added the extras for a 19-3 lead.

A whitewash looked on the cards until the French side hit back with two tries in six minutes, reducing the arrears to five points, but two penalties from Deegan each side of half-time settled a nervous period for the visitors.

“Our boys were a little bit tense at times, so the penalties gave us a buffer,” said Keane. “That buffer allowed people not to get over anxious, but to stay in what we train, what we practice, not worry about stuff and that was the idea of taking those points.”

Despite some big hits knocking Connacht back at times, it was all over when Healy grabbed his second, and Connacht’s fourth try, after 52 minutes. Deegan, growing in confidence, potted the simple conversion and then opted to keep the score ticking over with two more penalties to claim 18 points in all and the man of the match award.

Although the home side enjoyed some territorial advantage in the final 10 minutes, Connacht did well to keep them out, and crowned a deserving win with a Darragh Leader try at the death.

The 50-plus Connacht supporters of the 3,500 at Stade de Geneve may not have surpassed the 16,000 who witnessed Munster overcome Bourgoin 10 years ago, but they trumped soccer fans who the previous evening had witnessed their home side win 2-0 over Vaduz. They were also treated to some fast-paced running rugby from Connacht, punctuated by some big physical challenges from the French side.

“There were some smashing, really smashing tries out there,” said Keane, “but you only have to look at the surface – a really good surface and can’t speak highly enough of it because it’s a magnificent stadium, suited the way we wanted to play. Whoever had the idea, I’d like to shake their hand, may be we need one in Galway – can you do something about that?”

5 The sports fan would like to wake up now, thanks very much