‘It wasn’t pretty at times, but we knew it was going to be a huge challenge’ 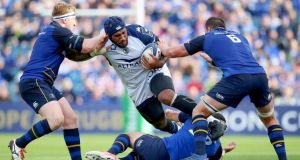 For Leinster coach Leo Cullen, this had been a draining day at the end of a draining week. Already without Johnny Sexton and Seán O’Brien from earlier in the week, this was compounded by the loss of Scott Fardy before kick-off and Isa Nacewa before half-time, and although his young charges rose to the challenge of meeting Montpellier head on, they could never completely shake them off.

Ultimately though, it was a hugely satisfying win, the positives of which should permeate through the whole organisation, even if Cullen looked and sounded shattered.

“I feel very relieved. Exhausted. It was pretty stressful watching at times, but we’re reasonably pleased with the overall outcome,” said Cullen. “It wasn’t pretty at times, but we knew it was going to be a huge challenge. For a lot of young guys to step in today, I thought they showed a lot of bravery, courage against some very big, physical individuals. They have a lot of power and quality throughout their team. We got a win and we can move on now.”

Despite all the upheavals, the first 35 minutes or so had assuredly been Leinster’s best performance of the season, although Montpellier kept coming, none more so than their Fijian two-try, human wrecking ball Nemani Nadolo.

“Yeah, definitely,” said Cullen in agreeing that Leinster’s performance had stepped up a level. “Nadolo is close to undefendable when he gets a head of steam up. He’s just that big and powerful. Guys were putting themselves in the way, but still, he has a very wearing effect.

“Montpellier, I thought they were very tight and limited in what they were trying to do in the first half, but I think they do that to narrow us up as well. Just to try and wear us down, make us tackle them.”

“Then they’ll try and move the ball a little bit more in the second half, and they’re dangerous. Not only have they really big forwards that wear you down, they’ve also got big backs that can get their hands free in contact, and constantly taking two and three defenders for us.

“It was wearing for our guys, and it took a big, physical toll. You could see guys were absolutely exhausted by the end of it. Some good things in attack for us, and we probably missed a couple of opportunities. We turned the ball over cheaply in a few rucks as well, which just allows Montpellier access into the game. Definitely areas we can get better at.”

In that respect, Cullen admitted that his young charges still had plenty to learn in the furnace of European rugby. “Absolutely, we’ve a tonne to learn. We’ll hopefully get a few experienced players back into the mix next week, and we’ll have some more tough calls selection-wise. Guys are getting the experience all the time. Guys are coming in for their first games here in Europe, so they’re only going to get better for that experience.”

Cullen was “reasonably optimistic” that Sexton and O’Brien will be fit for the away to Glasgow on the Scotstoun 4G pitch next Saturday lunchtime.

“We’ll see how they are. We’ll get them checked over the weekend. Come in Monday, Tuesday and see how they go. Put a plan in place based off what we have seen of Glasgow so far, and what we see tonight again in their game against Exeter.

“It’s another great challenge. Glasgow are riding high off the back of six wins. It’s not going to get any easier. Big game after big game at the moment, and it’s a great challenge. The squad is going to be tested, we made some calls early last week on guys, and hopefully some of those guys will come back into the mix. As always is the case, we’ve a few bangs and bruises that we need to get assessed as well, and see how those guys pull through as well.”

Nacewa’s injury, it transpired, was a new ankle injury as opposed to a recurrence of the calf problem that had seen him ruled out of both a Leinster-Munster game and a first game at the Aviva in all his time with the province.

“It’s just his ankle. I’m not sure exactly how bad it is. He got his ankle jammed in one of the rucks at the top end, and couldn’t run it off. We’ll see how is. We’ll see how those guys flag through over the next few days.”

At 25, Barry Daly, is not especially young, but after earning a trial last season through his prolific form with UCD, he augmented a try on his debut with one great take in the air, some good defensive reads and an alert piece of covering to a Ruan Pienaar box kick.

“Again, that’s why Barry got picked, because he’s able to score tries,” admitted Cullen. “I thought he was really good the way he finished. Took an unbelievable take in the air just shortly after that as well. It’s a huge step up for those guys. When you think Barry was 18 months ago playing in the AIL, even this time last year. He was in and out, playing some AIL games, and he was playing some of the B & I games.

“For Barry to come in, and from where he’s come, it’s fantastic. A great story.”