‘I think also that this is not the ceiling either . . . we’ve got some more growth in us’ 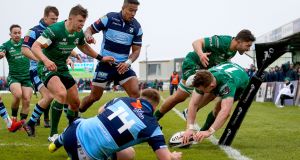 Connacht’s Matt Healy scores a try during the Guinness Pro 14 game against Cardiff Blues at the Sportsground. Photograph: Tommy Dickson/Inpho

After Connacht signed off last season with their best performance of the campaign in that emotionally fuelled 47-10 farewell win for John Muldoon against Leinster, it can’t have been easy for the Connacht CEO Willie Ruane to inform Kieran Keane that they were promptly dispensing with his services after just one season.

Many hierarchies, in the same position, would have opted to stick rather than twist. But that move and the ensuing decision, helped by David Nucifora, to hire Andy Friend has been handsomely vindicated.

Friend, in tandem with forwards coach Jimmy Duffy, attack coach Nigel Carolan and defence coach Peter Wilkins, has had a transformative effect, and without overhauling the squad. All told, 14 of the matchday 23 from that win over Leinster were involved on Saturday, and aside from altogether greater consistency and clarity in what they’re doing, what’s been particularly striking is the manner so many players have grown this season.

Jack Carty, who came up with the play of the match when completing a superb pitch-length try to give Connacht a 24-7 lead into the stiff wind blowing into their faces from the College Road end in the second half, is an obvious case in point. Tom Farrell, who along with Bundee Aki was excellent in largely nullifying the dangerous Cardiff midfield and came up with some big attacking plays, is another.

As was evident from early on, by any yardstick, collectively Connacht have been the most improved side in the Pro 14 this season. To put their achievement in perspective, they have accumulated a dozen wins and 61 points with one round remaining as against seven wins and 39 points last season when finishing in sixth place, just three points above Zebre.

“As I said, we’ve got a great coaching staff, we really do, and I just think we’ve got a playing group that’s got quality across the board,” said Friend. “I think one of the things we’ve done this year is given the fellas licence to express themselves and to play. I’ve got Caolin [Blade] sitting here beside me and he’s one of a few players that you’ve just seen a new level of player come out this year.

“At the end of the day it comes down to the players. The players have got to go out there and play, and I just sit back and applaud them for the work they’ve put in, and for the way they’ve backed themselves in playing the football they know they can play.

“I think also that this is not the ceiling either, and that’s the important thing. We’ve got some more growth in us, we’ve got some really good depth coming through, academy players coming through, and a strong academy, and we’ll just keep building those boys through. There’s some good work going on here.”

In earning the right to dine at Europe’s top table next season, Connacht are also continuing to press their case for their proposed new stadium if they are to maximise the potential from this rebirth in their fortunes.

“It’s a great argument for a new stadium,” agreed Friend. “I think we had 6,000-something there today, if we could get 12,000 that would be brilliant, which means more money, which means we can do more things for rugby in Connacht.”

Blade opened the scoring when supporting Paul Boyle’s pick up and break off the base of a ruck before the Connacht pack mauled over the line for a try by the impressive Gavin Thornbury to restore their lead.

Even after Carty’s try, Cardiff wouldn’t go away, and it require a sharp and adroit finish by the ever dangerous Matt Healy to keep the Blues at bay.

Carty’s try was the product of Connacht daringly going wide inside their own 22 after Tiernan O’Halloran countered off a quick throw by Darragh Leader. Aki made a half-break and offloaded one-handed for Leader to make inroads on the right before Farrell did so for O’Halloran to release Healy on the left.

A couple of recycles later, Carty took Denis Buckley’s pass and straightened through a gap, chipped Matthew Morgan and gathered on the run to take the fullback’s recovering tackle and score by the posts.

“Yeah, it is brave, but there was probably no point in kicking it from there,” said Friend. “But you’ve got Caolin at nine, you’ve got Jack who is on song at the minute, you’ve got Bundee and Tom, obviously, threats all across the park there and we’ve got the great finishers on the edge.

That Blade was again preferred to Kieran Marmion for this season-defining game was evidence of his improvement this season. As a product of Monivea and the Connacht system, the 24-year-old could appreciate this achievement all the more.

“As an individual, you want to play in the Champions Cup and test yourself with the top players in the world,” said Blade. “ As a collective, it’s huge; it’s huge for young people in Connacht – seeing that Connacht are improving. I don’t think we’re fully there yet, as Friendy said. Look, as a Connacht lad, you dream to play for Connacht and you dream to have days like this. It’s massive.”