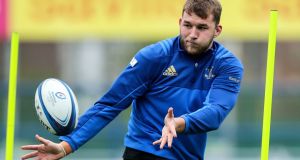 Ross Byrne: “He leads the team well; he’s a very clear understanding of what’s expected and how we want to play the game. So, no issues with Ross, he’s been fantastic,” says Leo Cullen. Photograph: Laszlo

If adversity reveals character then Leinster’s will be rigorously scrutinised given the home side’s injury profile against arguably the form team in Europe, albeit that it hasn’t dulled the sense of anticipation one iota.

That’s a legitimate billing for two clubs who have won the Heineken Champions Cup on four occasions each and in terms of rugby philosophy would be similar in outlook.

Robbie Henshaw (hamstring) came close to being available for selection while a brief counterpoint to the plethora of injury issues was the news that Sean O’Brien will return to training next week.

Leinster head coach Leo Cullen was asked about Sexton’s fitness with an eye to the Six Nations Championship opener against England next month.

“Johnny is making good progress. He should be okay by then,” he said

It’s not exactly unfamiliar territory for Leinster in terms of the body count as they went into last season’s home pool match against Montpellier without Sexton, O’Brien, Rob Kearney, Garry Ringrose, Scott Fardy and lost Isa Nacewa in the first half – yet still won.

Toulouse though are a better team though than their French compatriots, one choc-full of confidence as befits a side that have won 11 and drawn one of their last 12 matches in all competitions.

Jordan Larmour played fullback in Toulouse, Adam Byrne’s form has been excellent, Dave Kearney gets his chance after an unfortunate run with injury, Ringrose and Rory O’Loughlin played together against Bath, while Ross Byrne’s portfolio of big matches includes a couple of Irish caps late last year.

Byrne played home and away against Montpellier last season, came on after two minutes against the Exeter Chiefs in the Aviva Stadium and marshalled the team capably in a brace of matches against Munster, demonstrating aptitude and temperament in pressure-laden arenas.

Cullen said: “Ross has a ton of experience. It’s just another step in his progression. He leads the team well; he’s a very clear understanding of what’s expected and how we want to play the game. So, no issues with Ross, he’s been fantastic.

“I’m not someone who is worried about what I don’t have. We’ve got a good group, there’s a lot of experience there if you look at the 1-15; they’re all internationals. There are 20 of the 23 that have come through the Leinster academy system. Guys are maturing all the time. We’ve full confidence in the guys who are going to represent the group.”

Devin Toner’s absence will shine a light on the lineout, an area where Leinster have been susceptible to the odd wobble at crucial times in recent matches. Discipline, particularly in the tackle, is also going to be a key issue for the home side. The best way to negate Toulouse’s stellar backline is to starve them of possession.

The dazzling footwork of players like Toulouse wing Cheslin Kolbe and centres Sofiane Guitoune and Romain Ntamack will carry a yellow peril for any flailing arms. The French side contains five changes and a couple of positional switches from the one that squeezed past Leinster 28-27 in Toulouse.

It’s stronger based on the reshuffle with Thomas Ramos and the outstanding Antoine Dupont linking up at halfback, Maxime Medard relocating to fullback and Yoann Huget starting on the wing. Richie Arnold, twin brother of Wallaby international Rory, Francois Cros and former All Black Jerome Kaino, in ascribing virtues will add bulk, athleticism and steel.

It’s a big Toulouse pack and head coach, Ugo Mola has opted for a six-two split in terms of forwards to backs ratio on the bench. The French club has rediscovered its rugby mojo this season, the traditional virtues resurfaced, foremost a lethal counterattacking game.

Leinster can’t afford a slow start – by their own admission Toulouse’s huge early physicality caught them on the hop a little in the first game – have to be precise in everything they do, must edge the collisions and the set piece, be vigilant and organised in defence and avoid turnovers; it’s a long to-do list. But they also have to play to win the match and it’s striking the balance that’s crucial.

Rhys Ruddock, who takes over the Leinster captaincy, admitted: “They really got a handle of us physically from the first minute; they were looking to smother us and looking to impose themselves on us. So, just to learn from that and make sure that at one o’clock we’re the ones who are winning those collisions and putting the rest of the team on the front foot.”

The bookmakers have Leinster as nine-point favourites, a margin that seems at odds with how the teams present for this match and one that’s difficult to reconcile.

The old maxim that ‘forwards win matches’ is perhaps a route map to victory for the home side but it’ll be predicated on a near faultless performance on both sides of the ball.

Toulouse boast a better approximation of a full-strength side and travel with genuine expectation based on talent, momentum and the confidence that comes from winning. And yet there remains a nagging doubt that when aggressive, consistent pressure is applied, as Bath demonstrated at the Rec, they can look a little vulnerable and unsure.