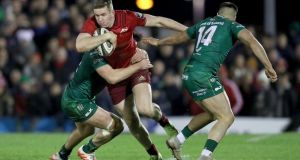 Chris Farrell has emerged as a major doubt for Ireland’s Grand Slam defence after the Munster centre suffered his latest injury blow in what has been a miserable run of luck over the past year.

The 25-year-old is to undergo scans to establish the extent of the knee injury picked up in the final play of the night in the win over Connacht on Saturday.

Farrell suffered the injury to his right knee at the Sportsground, having been out of action from February to November following a cruciate ligament injury to his left knee.

Munster are hopeful that this latest injury will not be as serious but the sight of the big centre with heavy strapping at the province’s high performance centre in Limerick on Monday illustrated the scale of the problem.

Head coach Johann van Graan has a number of injury concerns as he prepares his side for Friday night’s key Champions Cup game in Gloucester, but there is no doubt who his biggest concern is.

“Chris Farrell is the big one for us. He went for a scan on to his other knee.

“He literally got injured with the last play of the game and when the final whistle went I had a look at him and I could see the disappointment on his face.

“So, we don’t know anything yet. We’ll see what the scan reveals,” said van Graan.

The injury setback is the latest to hit the Tyrone native who has only played 16 games for Munster since his move from Grenoble in the summer of 2017.

He suffered the serious knee injury training with Ireland in February just after producing a man of the match display in the Six Nations win over Wales.

That kept him out of action until November when he came off the bench against Zebre in the Pro14 and a week later he crowned his first start for Munster since last January with a brace of tries against Edinburgh.

But Farrell, who made his international debut just over a year ago against Fiji, then suffered a quad injury in the warm-up in the home Champions Cup game against Castres.

That quad injury ruled him out of the return match in Castres a week later and the festive derbies against Ulster and Leinster before he finally returned on Saturday night in Galway.

But his hopes of getting 2019 off to a flying start after a miserable year looked set to be dashed, although the extent of the injury has yet to be determined.

Van Graan has other injuries to worry about before making the trip to Kingsholm but nothing to indicate that others will be ruled out as Farrell is expected to be.

Captain Peter O’Mahony is nursing a hip wound picked up in the impressive 31-24 win over Connacht, while Keith Earls and Dan Goggin also suffered knocks, but tighthead John Ryan has sailed through the HIA process and will be available.

“There’s a concern over Peter, so we’ll take our time. We only played late on Saturday evening,” added van Graan at their regular Monday morning press briefing.

“Earlsy has got a bit of an ankle but I believe he’ll be okay. Dan Goggin picked up a knock.

“JJ Hanrahan has got a bit of pain in his hip and he’s gone to see a specialist so it looks like he’ll be out as well. So, we’ve got one or two concerns with our backs and then just the usual bumps and bruises.”

On the plus side, hooker Rhys Marshall is expected to be available while Chris Cloete, stretchered off with a neck injury which earned Leinster and Ireland tighthead Tadhg Furlong a yellow card in their bad-tempered derby clash, could return.

“Rhys Marshall was back in full training last week,” added van Graan. “He’s available for selection and we’ll see how he goes.

“He’s his energetic self and Chris Cloete might be on the training field today [Monday], we’ll see how he goes. He might not go into contact today but we’ll track him for the week.

“It’s a short week with one session today, one tomorrow and then we’ll finalise our selections and have a captain’s training on Thursday,” added van Graan.