Leinster aware good start will be half battle in Champions Cup 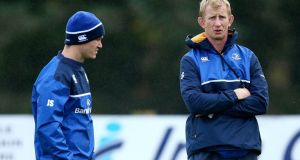 Leo Cullen may see Wasps as the first real challenge of his coaching career with Leinster. He knows that defeat to the Premiership side could be a very costly beginning in Europe.

While the former secondrow is not yet doing the pool sums, he knows that with Bath and Toulon around the corner, as well as Wasps in the Ricoh Arena, a winning start is required to avoid what could become a fraught uphill struggle.

With Luke Fitzgerald, Rob Kearney and Ben Te’o injured Leinster will lack a little solidity at the back, flair on the flanks and muscle in the middle, although Fergus McFadden brings physicality outside centre. McFadden hasn’t played with Noel Reid before but they have been training in those positions, according to Cullen.

Nor has Isa Nacewa played with Zane Kirchner, so there’s a bit of a patched-together feel about the team. No problem, says the coach.

“They have trained plenty over the last couple of weeks,” said Cullen of his centres. “Even during that World Cup period, Ferg would have done plenty in training at centre. Noel has performed really well during this whole period.

“He gives us a good bit of solidity in what the team is trying to do because he has been in the system pretty much from day one. He was involved with the very early Ireland camps but since Noel has come back he has given the team really good voice.”

The danger in Leinster’s lack of familiarity lies in Wasps attack, which is unchanged from last week’s win over Gloucester. All Blacks Charles Piutau and Frank Halai will make their European debuts, while outhalf Ruaridh Jackson and replacement scrumhalf Dan Robson are set to make their European debuts for the club. Christian Wade on the right wing gives Wasps danger men right across the pitch.

The Leinster backrow of Jamie Heaslip at number eight, Jordi Murphy and Seán O’Brien is another area where Leinster can greatly influence what way the game will turn. Some good news for home fans is that England’s James Haskell is out due to a knee injury.

Sam Jones comes into the starting lineup at blindside flanker alongside Nathan Hughes and George Smith. Smith is one of the players Cullen name-checked at yesterday’s briefing.

The Wallaby spent 10 years playing with ACT Brumbies before becoming Australia’s highest paid player in 2011 when he signed for Japanese side Suntory Goliaths. He wasn’t part of Michael Cheika’s World Cup squad but with 111 caps in his locker, Smith comes to Wasps with a reputation of being a great destroyer, as well as an occasional first receiver.

“We had 20 guys come back into the system two weeks ago so there are a lot of combinations that aren’t going to be perfect,” cautioned Cullen. “So we hope we will get improvements as the tournament goes on because we have worked closely with some and not with others because of the World Cup.”

Leinster locks Devin Toner and Mike McCarthy will also face a test of character against Wales’ Bradley Davies and England international Joe Launchbury, who is eager to escape the shadow cast by England’s dismal run in the World Cup.

Jake Cooper-Woolley returns to the starting line-up at tighthead prop for the suspended Italian frontrow Lorenzo Cittadini, who sits it out for a week. He’s back next weekend but former Leinster outhalf Jimmy Goperth’s three-week suspension keeps him out until November 24th.

Cullen is anxious for his side not to start the way they did last weekend against Scarlets in the Pro12 or they will again chase the match, as they had to last year against Wasps.

Scarlets knocked Leinster off ball over the first 40 minutes and gained yards playing their game on the edge. The first try under the posts was also too easy, with a few soft Irish shoulders. But Cullen knows this. The players this week are pushing hard, he says, and know what’s at stake.

There’s awareness too that the Leinster players believe they did not do themselves justice last season. Time then to make amends.