Leinster are ready to click but it may not be enough 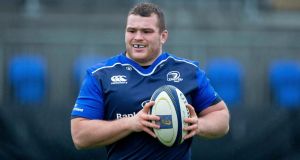 Jack McGrath has been favoured in the Leinster frontrow to Cian Healy, who will be on the bench. Photograph: Morgan Treacy/Inpho

As dead rubbers go, this is not actually a dud. For starters, technically speaking Leinster’s hopes of advancing to the knockout stages for the 11th time in 12 years are not gone, but defeat would absolutely extinguish those remote hopes. A loss for Toulon would also seriously imperil the prospects of the three-in-a-row reigning champions making the knockout stages as well. Now there’s a thought.

Then there’s the psychological ramifications of a win in front of a 40,000-plus attendance at the Aviva for their marquee fixture of the season; 43,910 tickets have been sold, of which 12,000 are season-ticket holders. There’s the feel-good factor it would generate throughout playing and coaching staff, the ensuing repercussions for their next three Pro12 games and, all in all, a timely reminder that Leinster can still mix it with the Euro heavyweights.

Technically, this is Leinster’s worst run ever in European rugby – four defeats in a row – which is a bit harsh given two of them have been away to Toulon, including last season’s semi-final defeat in extra-time in Marseilles. Even so, were that run to extend to five games, the dark post-World Cup clouds would linger over the Christmas turkey.

Both selections underline the importance of this game. Leo Cullen makes three changes. Cian Healy may have been cleared to play late yesterday evening pending the outcome of his appeal for an offence involving hooker Toulon the Guilhem Guirado, but after a trying week Jack McGrath is preferred at loosehead.

With Isaac Boss (hamstring) and Fergus McFadden (calf) ruled out, Eoin Reddan and Dave Kearney return to the team.

Toulon have made just two changes to their starting XV. Former Springbok flanker Juan Smith replaces Mamuka Gorgodze, who drops to a bench that also features the fit-again Argentina skipper Fernández Lobbe, while Jocelino Suta comes in for Samu Manoa.

For Leinster to have a hope they simply have to drastically improve their handling skills and accuracy at the breakdown (witness the concession of 15 turnovers and 17 penalties last week), while making more of their hard-won line breaks and openings out wide. But how on earth do you stymie the physicality of the Toulon defence and the poaching of Steffon Armitage, Mathieu Bastareaud and co.

“Our option-taking is good, and we’re carrying into a shoulder, not somebody’s body and arm. We’re outside shoulder carries, we’re strong for the carry. We’re working through even the back end of that carry, we’re working to the ground.

“An awful lot of time we kind of flopped on to the ground, and made it easy for someone to flop on us, as opposed to making it that bit harder for Armitage or [Romain] Taofifénua to get one.”

More offloading would help. Rugby has become a little like the first World War, in that there’s no avoiding the trench warfare. The hand-to-hand combat of the breakdown is unavoidable. But it can be reduced.

When Brian O’Driscoll was in his pomp, Leinster were one of the best offloading teams around. But a bit like Ireland, they’ve gradually curtailed this aspect of their game, and almost completely since O’Driscoll stopped playing. There were seven Leinster offloads last week, but more would reduce the number of breakdowns.

Were this the dilatory Toulon side that turned up in body if not spiritually for their opening game against Wasps on a late Sunday afternoon in Coventry, then even a misfiring Leinster would beat them comfortably.

But thanks to that defeat, Toulon reckon they’re fighting for their European lives. Their selection confirms as much. And then there’s the tally of one try in four hours of rugby. Of course, à la Ulster last week, they could suddenly click. They are not too far away. And for all Toulon’s collection of international galácticos, Leinster do have 13 international players in their starting XV (including four Lions) and another five on the bench.

However, when push comes to shove, coupled with the Wayne Barnes factor, Toulon do appear to have more ballast off the bench.