Piutau and Stockdale help Ulster take the sting out of Wasps 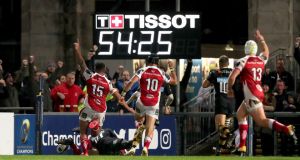 Hardly vintage Ulster, but good enough on the night. After an undistinguished first half of huffing and puffing, not for the first time this season nor one suspects the last, Ulster were set alight by their go-to double act of Charles Piutau and Jacob Stockdale.

Cometh the hour and all that. The contest hinged on a double whammy on Wasps’ right flank, which had looked there for the plucking all night, inside two minutes nearing the 60 minute mark. First Piutau set up Stockdale for their breakthrough try, and within a minute the pair combined not once, not twice, but thrice to create Stuart McCloskey’s try. Two well-struck Christian Lealiifano penalties steered them home, and the Kingspan stood for the Ulstermen as one.

It was far from a full-house and as Ulster struggled for 40 minutes to generate any go-forward the crowd had little to cheer about. With Ulrter confirming that Marcel Coetzee would undergo another knee operation and be sidelined again for the remainder of the season, the first-half only re-affirmed how badly they miss him.

In his absence Iain Henderson, Jean Deysel and Stuart McCloskey were stopped on or behind the gain line as Wasps came off the line quickly. Ulster were narrow and well contained, but finally brought some variation in the second-half with balls out the back to a second line of attack, while also putting more venom into their carries.

Their big men stood up - not just Piutau and Stockdale - but Henderson, Deysel, Kieran Treadwell and others too, such as Louis Ludik, who was outstanding in the air. Initially though, their pack struggled to impose themselves, and there were too many set-piece malfunctions, which one ventures cannot be repeated away to La Rochelle.

In truth, Wasps looked low on self-confidence, and should have been more than 6-3 ahead at the break. Elliot Daly opened the scoring after Matt Mullan put Wiehahn Herbst under pressure at the game’s first scrum and then, after 13 minutes of battering into a black wall, Ulster came up with something different.

From off the top lineout ball, Stockdale took a lovely late line behind Lealiifano onto the outhalf’s deft, no-look popped ball and when the visitors were offside for the third time, Cooney levelled the scores.

Ulster’s pack held up a Wasps drive when they went to the corner for a second time. Jean Deysel was also strong over the ball to win a relieving penalty, and the home crowd again roared their approval. Their pickings were slim.

A humdrum first half was summed up when Daly kicked out on the full from outside his 22, only for Lealiifano to forfeit an attacking lineout by taking a quick throw to himself on the Ulster 22. Wasps did move 6-3 in front with the last kick of the half through Jimmy Gopperth after Kyle McCall dropped to his knees at a scrum.

An intercept by Christian Wade, when Ulster had numbers out wide, and another lost lineout led to Lealiifano being penalised for going off his feet, Gopperth made it 9-3. Whereupon Ulster at last came to life off one of several aimless kicks to Piutau, this time by Dan Robson. He countered, and the main incision through multiple phases was when McCloskey offloaded to Luke Marshall, as did he to Deysel.

Lealiifano undercooked a cross kick to McCloskey with an advantage and then the outhalf was an inch or two short of the line after recourse to the TMO following a sequence of drives. But it didn’t matter. Following another line-out maul, Lealiifano went wide to Piutau, who stood up Wade and this did enough to draw in Willie le Roux, for Stockdale to finish well in the corner. Cooney’s missed touchline conversion meant they still trailed, but that didn’t matter much either.

When Piutau challenged le Roux for an aerial ball, it broke to Stockdale, who scampered into space and fed Piutau. He in turn offloaded out of the tackle back to Stockdale, who was collared by Wade but lobbed a left-handed pass infield for McCloskey to catch above his head and plough through two tackles for a try.

Ulster, transformed, went for the kill. Le Roux was alert enough to beat Piutau to his own little grubber, but they couldn’t break out, Piutau tackling Wade into touch. When Ashley Johnson encroached ten metres at a lineout and with Cooney forced off, Lealiifano’s penalty made it 16-9.

A double-tackle by Louis Ludik and Tommy Bowe forced a significant spillage from Johnson, and Ludik’s chase and Robbie Diack’s follow up had Ulster on the front foot again. Bassett, Wasps’ fiery young winger, was then binned for a high tackle on Ludik and even more importantly, Lealiifano’s superbly struck 45-metre penalty from wide out made it a two-score game.