Mike Prendergast says Racing will be fully loaded against Saracens

Parisians’ hunger for Champions Cup will drive them on, says coach and former Munster player 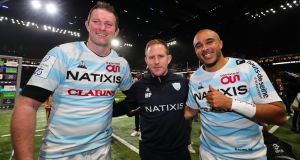 Donnacha Ryan with Mike Prendergast and Simon Zebo after the Heineken Champions Cup Round 1 game between Racing and Saracens at Paris La Défense Arena on November 17th. Photograph: Billy Stickland/Inpho

Munster need Northampton or Glasgow to slip up on Saturday in order to retain an outside interest in the knockout stages come the 1pm kick-off against the Ospreys at Thomond Park on Sunday.

But even then, the primary part of the equation is that Racing beat Saracens at Allianz Park in the other Pool 4 game at the same time.

While Saracens will be fighting for their European lives, and word is they will recall at least some of their missing English contingent, for their part Racing will probably need a win to secure a home quarter-final and, potentially, a home semi-final too.

Hence, it will be of some encouragement for Munster that the Parisians will be intent on signing off their pool campaign with a win.

“Absolutely. Absolutely,” confirmed the one-time Munster scrum-half and current Racing backs and attack coach Mike Prendergast. “That’s one thing I noticed coming into Racing this year, there is that hunger for the Champions Cup, which is great.

“It’s probably instilled from having somebody like Rog [Ronan O’Gara] in before and Donnacha [Ryan], that mentality is there and it was a big shock when I came in when we sat down at the start of the year and what our goals were and whatnot.

“Obviously Top 14 is huge but you can see it every week that the Champions Cup is in front of us, the body language by everyone, the intensity at training, just lifts that extra notch which traditionally over the years for French teams hasn’t always been the way. But thankfully it is here.

“The boys have been close before, came up a bit short and they really want to go the next one, which is great for us as a coaching staff,” said Prendergast, in reference to a second defeat in the final against Leinster two seasons ago, and last season’s 22-21 quarter-final loss against a 14-man Toulouse.

Whereas Racing blitzed Munster with three first-quarter tries in the semi-final two seasons ago, this time it was three tries in the last nine minutes. Teddy Thomas again scored two of Racing’s tries, and he now has five in Racing’s last three meetings with Munster. Go away, Teddy.

I know it’s a cliche but you win your collisions, you play front foot. That’s what we did

This flourish underlined there is no longer the fitness gap to compensate for the French clubs’ vastly greater spending power, which in turn was manifest in the X factor of Finn Russell, Virimi Vakatawa, Thomas and Juan Imhoff. And that was without Simon Zebo. They looked the pick of the French heavyweights who accounted for Irish teams last weekend.

Vakatawa, Thomas and Imhoff scored the four tries and, along with Russell, that quartet made 10 line breaks and beat 25 defenders. That must make life easier being the Racing backs/attack coach.

“Ah it does, absolutely,” said a smiling Prendergast, “especially when you are winning collisions. That starts up front. I know it’s a cliche but you win your collisions, you play front foot. That’s what we did, especially in the last 20 minutes, and maybe the last 10 minutes of the first half as well.

“Then when you have a passing game and the threat that Finn brings with Virimi outside and Teddy and Juan working in off their wings, you do have great threats around the place, but it is about getting the right ball.

“We’re putting a lot of focus on our ruck because at the end of the day if your ruck doesn’t function properly – you’re looking for quick ruck ball – it’s going to dent your attack,” said Prendergast, noting that winning the collisions also reduced the threat of Peter O’Mahony and CJ Stander over the ball.

I think our bench towards the end, the last 15-20 minutes, allowed us to win at the gainline

“Thankfully then, the couple of opportunities came up and we took them. When you have guys like Virimi there’s a big focus on him usually as one X-factor player, but there are two or three fortunately in our backline, which causes problems defensively.”

Prendergast shared his players’ evident delight at procuring a bonus point with the game’s last play, and praised their composure “against a really, really resilient Munster team defensively”.

“I think our bench towards the end, the last 15-20 minutes, allowed us to win at the gainline, and when we did Finn was able to play on the front foot. I think at the moment he is probably the best 10 in the world on front-foot ball.”

Needless to say, the win was slightly bittersweet for the ex-Young Munster and Munster scrum-half.

“I have only huge admiration for the performance Munster put in out there,” said Prendergast. “The scoreline probably didn’t reflect 65 minutes or so of the game, but we showed cool heads and we were quite clinical in the last 15 minutes.”

“I know there was a bit of pressure [on Munster] over the last couple of weeks because of the losses to Leinster, narrowly, and Ulster – a lot of players out through player management and they had a couple of injuries and stuff.

“I was saying to the players during the week: ‘Don’t focus too much on that, focus on their last performance against Saracens’ in which they were very impressive again to 60-65 minutes – not too unlike this. The game was there to potentially be won and I felt they should have beaten Saracens, so you are looking at 30 minutes of rugby that can change it for you.

“Unfortunately at this level of rugby it’s ruthless enough and that’s what it came down to but, absolutely, they’re not that far away. They’re a very good side.”