Gerry Thornley: unbeaten start for provinces but things to get tougher 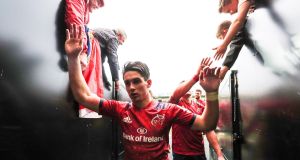 A satisfying opening weekend for the Irish in Europe, albeit a decidedly more trying one awaits in round two. Leinster, Ulster and Connacht all won at home, but are now away to three teams who won on the road, and after their gritty, sleeves-rolled-up draw away to Exeter Munster return to both familiar and must-win territory at Thomond Park.

Munster are first up at 1pm on Saturday against Gloucester, who marked their return to the Heineken Champions Cup after a four-year absence with a hard-earned 19-14 win over the French champions Castres at Kingsholm at the weekend. Munster did the double over Gloucester five seasons ago, and their fourth trek to Limerick will re-invoke memories of their first, the so-called Miracle Match, of January 2003.

But there’s little doubt that Munster’s 10-10 draw in Sandy Park on Saturday was the best result for any of the four sides in what looks like being a very competitive pool.

“There is always room for improvement,” admitted Johann van Graan, his emotion after another of Munster’s minor Euro epics abundantly clear. “We came here to win. I am incredibly proud of the lads. I thought their effort was immense. The wind was incredibly tough.

“For us to come away from an away game with two points is great. Not a lot of people gave us any chance, so it is a good two points. We had opportunities to win it, so did they. It was a massive battle between two very good sides.”

“There was relentless pressure. They pose such an attacking threat. We had to make our tackles. There were some incredible recoveries. There was one from Duncan Williams off the back of his work rate off the ball which was incredible. Those small moments get you two points away from home,” said van Graan, in appreciation of the double try-saving tackles by his scrum-half.

Munster on Sunday tweeted that Sammy Arnold was released from hospital after an overnight stay due to the throat issue which forced his departure within eight minutes of coming on as a second-half replacement.

They will also be monitoring the hamstring twinge which Keith Earls felt in the warm-up and led to Darren Sweetnam’s late inclusion.

Leinster travel to Toulouse to face their fellow four-time winners on Sunday (kick-off 4.15pm local time/3.15pm Irish) in what is the most garlanded head-to-head that the tournament can throw up. In a weekend notable for its heroes, there’s no doubting Freddy Burns was the villain. His missed kick from in front of the posts and premature try-scoring celebrations, which enabled Maxime Medard to provide another of the weekend’s hugely significant try-saving tackles, will remain one of the competition’s highlights reels for years to come. The net effect was to gift wrap Toulouse a 22-20 win in Bath, albeit Leinster tip the group and remained the only team to record a bonus point over the opening weekend. A step ahead of the rest.

When Toulouse won the Cup in 2010 they led Leinster four-one, before missed out for the first time ever last season when Leinster matched the four stars. “They were the team we all wanted to emulate, amazing tradition at the club, they had a real aura about them – which I think they’ll always have,” admitted Leo Cullen after Friday’s win over Wasps.

“The last couple of years have maybe been tough years for them, with some change after someone who’d been in that role for a long time, which we’ve seen in other sports some similar parallels to that and that transition.

“But they’ve a very strong core of Toulouse people involved in coaching now, and you see they’re bringing in some good young players with some very experienced overseas players, the likes of Jerome Kaino’s come in, Charlie Faumuina, to name a couple. They’ll be a handful.”

“I saw their pitch last week, it’s very heavy over there, so it’s going to be a very different game for us. There’ll be a lot of things for us to get our head around.”

Dan Leavy and Jamison Gibson-Park are likely to be fit again, to give Cullen some more selectorial posers.

Ulster face the most daunting Irish assignment away to last season’s beaten finalists Racing 92 in their enclosed, artificial La Defense Arena; the latter having beaten the Scarlets 14-13 away on Saturday.

“I don’t think we’re going to have to worry about the rain,” noted Rory Best after his side’s 24-10 win over Leicester at a sodden Kingspan Stadium on Saturday. “It’s going to be a tough challenge. If we thought that Leicester were big then Racing are going to take it to another level. They’re a team that are probably second favourites for the competition.”

At least the win over Leicester has eased the pressure on Ulster. “Well probably externally,” said Best. “As everyone knows, if you want to be in the mix come January you need to win your home games. I think internally we put a lot of pressure on ourselves to back up the performances. It’s something we’ve been guilty of in the past couple of seasons.

Saracens and Newcastle, away to Glasgow and Toulouse, redressed the win-loss column for Premiership sides on Sunday, but the provinces, having emerged unbeaten from three Anglo-Irish contests, will we be hearing the usual gripes from across the water?

“Yea, of course you are,” said Geordan Murphy good-naturedly. “It is a difficult one. Speaking to the lads, Rory [Best] had 18 weeks off in the summer and he came back and played one game last week and he looked fresh tonight, running around. Tom Youngs has played eight games in a row for us and has gone to the well, and had to play sort of 70 minutes last week at Twickenham in pretty horrific conditions.”

“We do have tired bodies but that’s not an excuse, and half-time tonight we were in the game and weren’t fatigued. We just weren’t clinical enough, and that’s a huge lesson for us.”

Yet the former Irish full-back also conceded: “I love watching the Irish teams play because they’re so good at that cup knock-out rugby, and I think that comes from playing [Cup ties] from a very young age, but it’s just smart football, the way they put the ball in behind you and turn you. Even when we were 14-3 down tonight, just the way Ulster played, they were very composed and kicking it in behind and making it difficult for us to exit in the wet.”

Kyle Godwin’s first two tries for Connacht set up their 22-10 win over Bordeaux Begles at the Sportsground on Saturday, although Andy Friend admitted to disappointment after missing out on a bonus point. Hence Sale top the group after their 41-24 bonus point win away to Perpignan on Friday night prior to the sides meeting at the AJ Bell Stadium on Saturday at 3pm.

All good so far, but about to get tougher.