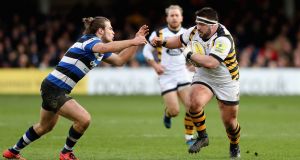 Marty Moore of Wasps in full flow: “Regardless of what’s happened, I’m happier for being here than I would have been back home.” Photograph: David Rogers/Getty Images

When the uncapped JJ Hanrahan was interviewed by Second Captains this week, the big question was how Kerry’s gifted play-maker found life in Northampton, having all but disappeared from view since joining the Saints in 2015.

“It was an unbelievably steep learning curve,” said Hanrahan, who is still only 24 and whose return to Munster is imminent. “At Munster you have everything at your feet, every coach you’d want, everything you want it’s there. But sometimes when you go away, even to one of the big Premiership clubs, there are certain things you have to figure out for yourself.

Like any theory, this can be flipped on its head. Take Marty Moore. The 26-year-old underwent a turbulent switch from Leinster to England last summer but an immediate boon was access to a three-tour Lions prop, as Dai Young doubles up as the Wasps head coach.

“He’ll be in his mouldies and you’ll have your 21mms [studs] and he’ll still show you how it’s done,” Moore told the Sunday Times. “He was a massive draw.”

The pay rise softened the blow of being sent to Coventry. However, the downside to a healthier bank balance is Moore’s moratorium from Test rugby as David Nucifora and Joe Schmidt have moved closer than ever to a zero-tolerance policy when it comes to recalling wild geese.

Moore is the chief martyr. Whereas Ian Keatley’s Ireland recall over Ian Madigan could be justified by Madigan’s inability to get picked by Bordeaux-Bègles, Moore was poised to dovetail into a long-term tighthead partnership with Tadhg Furlong at both Leinster and Ireland (following the Jack McGrath and Cian Healy model).

When a national contract never materialised, Moore had to be satisfied with Leinster’s two-year deal. Then came Wasps three-year offer to become a cog in Young’s ambitious plans, financed by Dubliner Derek Richardson.

When it proved no choice at all, Schmidt made a late bid to steer Moore back into port but heads of agreement had been signed. Ireland then turned to Finlay Bealham in November as cover for Furlong until John Ryan’s promotion by Munster saw him fast-tracked onto the Six Nations bench.

The game moves swiftly on. Moore, hidden from view unless you pay for the privilege, is maturing into a serious tighthead, locking horns with the Joe Marlers and Mako Vunipolas in the Premiership, rather than McGrath and Healy in training.

“Marty has really opened up as a person,” said Jimmy Gopperth, who departed Leinster just as Johnny Sexton returned for a £300,000 a season gig with Wasps. “He has really embraced the culture over here and I suppose getting out of his comfort zone has really helped him. I don’t think it will be too long before he is back in a green jumper as well. He is doing an excellent job for us.”

Though not excellent enough to start today.

“When Jason Cooper-Woolley is fit he tends to start, so it’s what we expected really,” said Leo Cullen. Woolley undoubtedly lightens the load, playing 16 matches to Moore’s 22 so far this season.

Anyway, form is all but irrelevant in the Ireland context. Nor did the 10 caps, as understudy to Mike Ross during Ireland’s successful Six Nations in 2014 and 2015, count when it came to penetrating the Carton House bubble from an English or French base.

The policy of only selecting those playing for the four provinces is to dissuade Ireland’s other specialist players from leaving. Still, the move has helped to physically transform Moore.

“His fitness has come on massively. They put a big emphasis on fitness here at Wasps, and he has worked incredibly hard with our trainers and within the team and he is reaping the rewards,” Gopperth said.

“That has given him confidence within the structures of what we are trying to achieve. His skill level has also really improved. He is catching, passing and drawing people in. He looks like a bloody backrower.”

Whatever he is becoming, cap number 11 currently looks at least two years away even if it still feels like he needlessly slipped through the IRFU net. And all the while internationally capable tightheads remain the rarest commodity on this island.

“Regardless of what’s happened, I’m happier for being here than I would have been back home,” said Moore. “You make sacrifices to be happy and to progress as a person and I think I’ve made the right ones. At the moment, I’m happy. I’m where I wanted to be. I can’t see myself playing for anyone other than Wasps, to be honest.”

With Furlong almost certain to tour New Zealand with the Lions, maybe Joe Schmidt will be presented this afternoon with enough evidence – however unlikely over 30 minutes – to make a solitary exception to the unwritten rule for the summer tour to the US and Japan.

However, there is also a ripple effect to consider. The loss of Moore has forced Leinster into being creative. At 21, Andrew Porter reportedly possesses greater gym strength than Furlong and Healy at the same age. Porter was the dominant loosehead at last year’s under-20s World Cup as Ireland beat New Zealand before losing to England in the semi-final.

The problem is Leinster currently have five senior looseheads – Porter, Peter Dooley, Ed Byrne, Healy and McGrath – so the UCD student has become an experiment. Three AIL looseheads have already twisted some joy out of this enormously talented prospect.

If the Porter switch to tighthead works out, everyone in Irish rugby, except Moore, will benefit. If not, a valuable year in his loosehead education will have been lost.

The other Leinster exile at Wasps is Brendan Macken. Young picked the centre for the 20-18 defeat in Galway during the pool stages of the Champions Cup and the 25-year-old did bag his fifth try of the season off the bench during last Sunday’s 40-33 victory over Worcester.

However, Macken, who has only accumulated 17 games in two seasons, was squeezed off today’s Champions Cup bench by Samoa’s Alapati Leiua.

“He has the likes of Elliot Daly to sit behind and try and get through but last week he got a bit of game time and played really well, scored a try,” said Gopperth. “That’s what he has been like all year; when he gets his opportunity, he doesn’t let it go.”

Macken, whose contract is up this summer, currently takes up a foreign spot at Wasps.

Some players, for varying reasons, leave Ireland to keep their careers afloat. Others, like Moore and more recently Donnacha Ryan, fall between two stools in that Nucifora’s budget is unable to ringfence them in the national pen.

What’s clear from the Moore situation is that the wheel keeps turning. Other gems, like Joey Carbery being set free by Madigan’s departure and John Ryan taking hold of a dominant Munster scrum because BJ Botha was released, are hiding in plain sight.

“It was always in the back of my mind [to come home]. But it’s never a clear-cut case. Everyone is in a different situation, different pecking order. All I can do is judge what was the best for me in my particular situation,” said Hanrahan.

“I’m happy I did it but I wouldn’t be going around saying for everyone it is the right job.”

The timing does not always work out as smoothly as it did for Hanrahan. Finding a way home can prove difficult. See Madigan switching from Bordeaux to Bristol. For one, you may have to swallow a significant cut in salary. Second, there might not be any room in the inn.