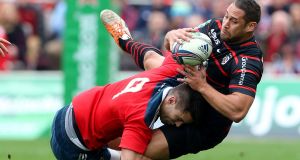 As you do. Sometimes you don’t know what to believe in the British mid-brows. But two All Blacks in the same lurid story is sometimes too much to pass up. Showing less of where rugby has come from than where it has arrived, it now has relevancy to the greater world of gossip.

New Zealand rugby, which attracts the grubby headline as often as it thrills, once had McAlister at its hub. With 30 appearances for the All Blacks and a debut at 21-years-old, his peripatetic rugby career from The Blues in Super Rugby to Sale Sharks and now Toulouse has been more enigmatic than controversial. And it has always been interesting.

In 2004 he beat Jamie Heaslip to the world young player of the year award as New Zealand beat Ireland in Glasgow to lift the Under-21 World Cup. He was on the rise.

But Pat Lam wouldn’t play McAlister for The Blues in 2011, choosing Stephen Brett ahead of him, despite the NZRU breaking their eligibility rules to allow him to be rushed straight into the All Blacks. He hadn’t played in a domestic competition the previous year having spent two years at Sale.

So he left Lam and New Zealand for Toulouse, apparently without a huge clamour for a statue or a ground to be named after him. This week he is on the phone from France peddling an original view. The Toulouse team to come to Thomond Park is basically rubbish.

“There is a lot of negativity around the club at the moment, with us not doing so well,” he says. “That’s normal when a club like Toulouse aren’t in the top half of the table. It’s not normal for a club like this.

“There is a lot of expectation and we’re probably the first to feel it. We’re just trying to channel that negativity and not try and get too pressured by it.”

Like European royalty stripped of assets, Toulouse are no longer top-table material. Currently 10th in the Top 14, four places from where they need to be in the top six, they have won fewer than half of their games, 10 out of 22.

“If we don’t make the six, it will be the first time that Toulouse never made the six in 40 years or whatever it is,” he says.

Their route to Limerick was also etched in desperation and close calls, scraping through the pool stages and needing to beat Connacht at home in the last round of games to squeeze into a quarter-final. Toulouse lost both of their away pool matches in Galway and Coventry.

“It’s not easy to do but we’re just trying to go out and there and play our best,” says McAlister. “It’s just unfortunate that we are not getting results going our way.

“We all know they [Munster] are a very strong side, especially at home. We’re going to be looking at them throughout the week to see how we can attack them. We’ve got everybody fit and we’re definitely going there to try and upset them. But it’ll be very, very tough.”

It might be the original direct Kiwi calling a spade a spade or perhaps McAlister sees some profit in falling into mind-games mode. Normally, though, that requires a player to talk up the opposition strengths, not talk down his own team’s form.

There is talent in Toulouse but evidently also some unease about the position they are in. So far in the league, consistent performances have been more imagined than real. There is no shortage of quality with a host of French internationals at the club – Yoann Huget, Jean-Marc Doussain, Gael Fickou and legendary captain Thierry Dusautoir.

But McAlister hasn’t quite finished picking out the highlights on his Munster wall of shame. He remembers that last time he was in Thomond Park and he remembers the time before that. More like traumatic events than memories.

“We got a good hiding that day,” he says candidly. “So it wasn’t a great experience. They got on a roll and put us away pretty early in that second half.

“I played a few years previously with Sale and we got smashed as well. My record at Munster isn’t great.”

Jeez, no, it isn’t great at all. But the 33-year-old will be looking for a different type of headline this weekend, less lurid, more Champions Cup.

He considered coming to Munster once but chose Sale as he grew up in the Manchester area while his father played professional rugby league for Oldham and Castleford.

Maybe in that there’s a motive somewhere. Not to get “smashed” again by the club he might have joined. That would do.

1 Reality Bites – Tales from the new normal: Caitríona Cormican
2 James McClean still failing to learn his own online history lesson
3 A beautiful, happy accident - Moneyball is the best sports movie ever
4 Ian McKinley: ‘You do take for granted the simple things in life’
5 Nicholas Quinn: ‘Swimming became how I dealt with grief’
Real news has value SUBSCRIBE