French rugby on a high as feelgood factor proves infectious 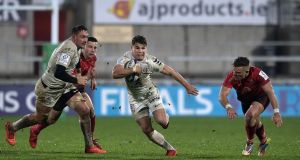 Antoine Dupont of Toulouse in action against Ulster at the Kingspan Stadium. Along with Romain Ntamack he forms the beating heart of new-look France. Photograph: Charles McQuillan/Getty Images

Leinster’s win in Montpellier last Saturday was all the more impressive for it being the only win over a French club. Seven wins out of eight, four of them away from home – clubs from the Top 14 have never hit the ground running quite like that.

It may yet be a one-off, but more likely it is a harbinger of things to come. French rugby is undergoing a revolution and if in part by accident as well as largely by design, for the first time since the game went professional a quarter of a century ago they are discovering that the national team and the Top 14 are not necessarily mutually exclusive.

Rather, they are now mutually beneficial.

Ironically, the most recent catalyst was the latest row between the French Federation (FFR) and the clubs’ umbrella body, the Ligue National de Rugby. After the latter’s threat of legal action when France’s end-of-year Test window was extended to six matches, an agreement was reached that no player could play in more than three of those Tests.

Fabien Galthié and his array of assistant coaches opted to frontload their itinerary, primarily in a bid to win the Six Nations for the first time since 2010. Hence, come the final against England, they were shorn of 25 players. This included the entire ‘23’ which had beaten Ireland.

Taking the number of players used in five games to 51, including 13 debutants, for the final Galthié picked a starting XV with only 68 caps to their name, whereas the most experienced England team of all time had 813. The French team manager Raphael Ibanez admitted it could be “a farce”.

Instead, this callow team produced a stunning performance of no little skill and bucketloads of resilience, and were only deprived of victory in the final by two undetected knock-ons prior to the converted English try which took the game into extra time.

Live on terrestrial TV, the performance of Les Bleus captured the imagination of the French rugby-supporting and playing public.

Writing in his column in The Examiner before the first round of matches last weekend, Ronan O’Gara warned: “The French will be difficult to deny this time around.”

He did not necessarily mean his own club, La Rochelle, before adding: “We are in the midst of a rugby revolution in this country. The national team is humming, people want to play for France, players want to get to French camp, even if there are 70 others vying for a spot. The upsides are obvious. We experienced it with Munster when the national team were flying, and the bounce when we returned to the province was palpable.”

Many measures were already in place to kick-start this revolution, uppermost among these being a gradual increase in the ratio of JIFF (academy-trained, French-qualified players) which the LNR introduced in 2010-11. A decade on, Top 14 clubs are limited to 14 non-JIFF players on their books and must average 16 JIFF-qualified players in their matchday squads across the season.

The increased concentration on developing French-qualified players can be evidenced in their first, back-to-back, Under-20 World Cup wins.

This is O’Gara’s sixth season in French club rugby since retiring in 2013, and, bearing in mind it was not a Six Nations or a World Cup game, he said: “I have never seen such an excited reaction [as there was] to the French game against England. La Rochelle had three people on the pitch, and that has fed the other lads in the club to say ‘that could be me’. Before, that was never the case. Of course, the downside is that come February, I’ll be seeing less of Brice Dulin, Uini Atonio, Pierre Bougarit and Gregory Aldritt, who may well be the next French captain.”

It hasn’t always been thus. As one French journalist told me this week: “Five years ago players did not want to go to French training camps. They would plead with their club physio to say they were injured. Now that has all changed. Everybody wants to play for France.”

This week’s draw for the 2023 World Cup in France has further fuelled this desire while the three-game cap also meant that the likes of Antoine Dupont, Romain Ntamack, Thomas Ramos and Cyrile Baille at Toulouse, as well as Camille Chat, Bernard le Roux, Virini Vakatawa and Teddy Thomas at Racing, had been back with their clubs for a few weeks before they played Ulster and Connacht last weekend.

The seven French wins included four on the road, and the absence of fans perhaps contributed to this. They all found different ways of getting over the winning line. Capitalising, literally, on the bounce of the ball, Bordeaux/Begles ground out a win in Northampton and, after scoring one fluid try on a wet night in Edinburgh, ditto La Rochelle, as the fitness levels of the French team also dispelled a few hoary old chestnuts.

Clermont’s seven-try, 51-38 win in Bristol was the most eye-catching, albeit it was as much Pacific Islands’ infused, with a Japanese flourish from Kotaro Matsushima, as it was French.

Pulling the strings were Morgan Parra (32) and Camille Lopez (31), each of whom could avail of the running threats around them, and neither of whom are ever likely to play for France again given the conveyor belt of young halfbacks in French rugby right now.

Leading the way are Dupont and Ntamack. It’s often said that when Toulouse are going well, so too France, and Galthié has added some Anglo-Saxon rigeur to the defence with Shaun Edwards and the South African kicking coach Vlok Cilliers (France kicked the most and passed the least in the Autumn Nations Cup) to mix with their power game and trademark audacity and instinct.

At its beating heart are Dupont and Ntamack. Each seems to have a 180-degree radar to locate where the space is and, as he showed with his try against Ulster, when the play stalls, Dupont makes it seem as if the other 29 players are frozen still while he is first in motion.

It tells us much about the similar approach at Racing that two of their key imports are Finn Russell and Simon Zebo, probably the most audacious and French-like players to have emerged from Scotland and Ireland in recent years.

The more compressed, four-game pool format and two-legged quarter-finals (not to mention the final in Marseilles) is perhaps also more to their liking and those opening seven wins will keep them interested too.

Perhaps the French won’t lord it over almost all others again this weekend. To begin with, Toulon and Montpellier have difficult-looking assignments away to the Scarlets and Wasps tonight.

Nor has a Top 14 side won the European Champions Cup since Toulon beat Clermont in 2015, but they’ve had four of the five losing finalists since then.

They are due a winner and you sense that some team, most likely Leinster, will have to be at their very best to deny them this season.