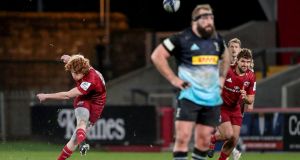 Munster move on to what seems a particularly daunting assignment against Clermont in the Stade Marcel Michelin next Saturday with four points tucked away following last night’s 21-7 win over Harlequins in their return to the Heineken Champions Cup.

Head coach Johann van Graan expressed his satisfaction with the victory and was unusually aggrieved over the two late hits on his 21-year-old replacement outhalf Ben Healy by Alex Dombrandt, who was one of Quins’ three yellow cards, and Joe Marler, which went unpunished.

“He did really well, kicked a magnificent penalty,” Van Graan said of Healy’s performance, before quickly adding: “We’re very worried about him, he took two late hits there. We’re going to get him checked out now. It was quite clearly a tactic from the opposition to hit him late and certain things in the game are just unacceptable. He’s now got injured because of that.”

Van Graan declined to reveal whether Healy had suffered a rib or sternum injury from what he believed was this deliberate targeting.

“It’s too early to speculate on it [injury type], I’ll give more info once we know a bit more. It was a tough game for the referee, I thought he did really well,” said Van Graan of French referee Pascal Gauzère, who was certainly a very central figure for most of the game.

“We also gave away one cynical penalty but certainly from a foul play point of view, there were one or two cards out there.”

Indeed Harlequins played almost threequarters of the second period with 14 men due to three yellow cards, but although Munster only scored two tries and did not press on for the bonus point, Van Graan said: “We’re very glad of the win. It was difficult conditions, opponents who didn’t go away. We would have loved to use more of our opportunities but any win in Europe is a good win.”

“We knew it was going to be a real 23-man effort and we created chances that we didn’t use, but we’re very happy with our impact players,” Van Graan added in reference to his bench, while also confirming that Peter Malone, is on personal leave from his role as director of the academy, with the IRFU’s Peter Smyth taking temporary charge.

About the only apparent solace of travelling to Clermont next Saturday is that they won’t have their Yellow Army either, although little else about their stunning, seven-try 51-38 win away to Bristol will have assuaged Munster fans.

“It’s the first time I’ll personally be going to Clermont, I’ve heard a lot about them. They’re one of the European powerhouses if you look historically, some big tussles between Munster and Clermont. If you looked at them yesterday, they were excellent the way they started against Bristol.”

“It’s a massive challenge ahead for us and that’s what this competition is about, to challenge yourself against the best teams. It’s great that Munster and Clermont will go out with their top teams because this is what the competition is about. You always want to play your top teams in this competition,” he added, in reference to other unnamed sides who have fielded, or will field, weakened sides, such as Gloucester in losing to Lyon in Pool B yesterday.

Five teams in this half of the draw picked up pool wins, although Racing were pushed to the pins of their collars in beating Connacht 26-22.