More players have joined including Adam Hughes who, at 30, is the youngest of the group 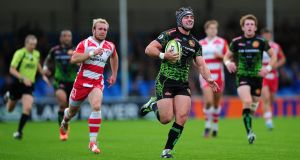 Adam Hughes scores a try for Exeter Chiefs in 2014. He was forced to retire at the age of 28. Photo: Dan Mullan/Getty Images

Lawyers representing former rugby union players have taken a decisive step in their legal action against the game’s authorities, issuing a pre-action letter of claim to World Rugby, the Rugby Football Union and Welsh Rugby Union.

Rylands Law, which announced the move on Thursday, revealed that two more players, Adam Hughes, a former Welsh under-20 international, and Neil Spence, a former England under-21 international, have joined the claim made by players over the impact of head injuries suffered during their careers.

Four more players have also joined the action, but wish to remain anonymous at this point, which brings the total number involved in the test case to nine. The firm are already representing over 100 former rugby players aged in their 20s to 50s, and say that 30 more have contacted them since Thompson, Popham and Lipman’s involvement in the case was revealed by The Guardian last week.

Hughes, only 30, is the youngest player involved in the action so far. He has been diagnosed with “having brain injuries and post-concussion symptoms”, and has been advised that he is on a similar medical trajectory to Popham, Lipman, Thompson, and Spence, who have all been diagnosed with early onset dementia and probable CTE. His testimony is a chilling counter to the argument that the game has become safer in the last decade.

Hughes played as a centre for the Dragons, Bristol, and the Exeter Chiefs between 2010 and 2018. He was forced to retire at the age of 28 after a particularly severe concussion. “It was just one head knock too many. I was finding it more and more difficult to recover from each and every bang to the head,” Hughes says. He reports being knocked out eight times in his career. “At first it was the bigger concussions where I was completely knocked out that took me ages to recover from then over the time even the smaller ones started to have an impact. For the sake of my health, I had to bring it to a halt.

“For me, I think the biggest issue around concussions was attitude,” Hughes says. “It was often treated like a weakness if you don’t dust yourself down and carry on. So naturally you see many players expert at just getting up and carrying on, regardless of how they feel. Ultimately, it’s their job, and no player wants to lose their job.”

Hughes admits that he knew the risks involved, but argues that “if there were opportunities to make the game safer, and I believe there were, then it was incumbent on those with power to do so. The game still has a very long way to go in terms of education about concussion.”

Spence, 44, who played in the back row for Leicester, Gloucester and Rotherham Titans, says “I’ve lost count of the number of concussions and head injuries I have had through my career. In fact, I used to judge how well I had played based on how fuzzy-headed I felt at the end of a game.” He reports suffering from “mood swings, anxiety attacks, depression and anger issues”.

The pre-action letters of claim set out the broad allegations upon which the claims are based. It states that that governing bodies had a duty “to take such steps and to devise and implement such rules and regulations as were required in order to remove, reduce or minimize the risks of permanent brain damage as a consequence of the known and foreseeable risk of concussive and sub-concussive injuries.” The governing bodies have a maximum of three months from the date of acknowledgment of the Letter of Claim to provide their initial responses.

Shortly after the pre-action letter of claim was launched on Thursday the governing bodies released a join statement which read: “World Rugby, the Rugby Football Union and Welsh Rugby Union can confirm they have received a letter of claim from solicitors representing certain players and will now take time to consider its contents. We have been deeply saddened to hear the brave personal accounts from former players. We will continue to use medical evidence and research to keep evolving our approach. As with any potential legal proceedings, it would be inappropriate to comment on the specifics of the letter.”– Guardian