Formidable manager has overseen a remarkable transformation in North’s fortunes 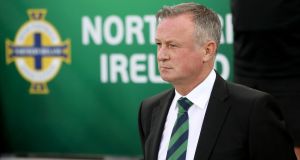 Michael O’Neill was in a Drumcondra hotel talking about Shamrock Rovers, the 400 Club and Rubin Kazan while, out of the corner of one eye, watching Novak Djokovic on TV. It was September 2011. All four impressed him.

Rovers had just drawn a pacy Dublin derby with St Pat’s at Richmond Park on their way to a second consecutive League of Ireland title under O’Neill – 2010’s had been the club’s first for 16 years.

But it was Rovers’ exploits in Europe that were catching eyes beyond Tallaght.

In defeating Partizan Belgrade via Stephen O’Donnell’s extra-time penalty in the Europa League play-offs, Rovers had become the first Irish club to reach the group stage of a European competition. O’Neill was a mixture of happiness and wariness, something of a managerial characteristic.

On this night, the wariness stemmed from a fairly intense Monday night match eating into preparation for a Thursday game that was an occasion, a statement and a reward as well as another 90 minutes’ football. And if there is one thing observers, colleagues and his players have learned over the past decade, what Michael O’Neill never does is fail to prepare.

It gets forgotten in time, but Shamrock Rovers had played Juventus in the previous season’s Europa League qualifiers, having knocked out Bnei Yehuda in Tel Aviv with a late winner. Alessandro Del Piero proved too much for Rovers but Juve were pushed in two games and a year on O’Neill said: “What we learned from being in Europe last season was team preparation.

“Typically, you need four or five days to prepare.”

The reality of League of Ireland life – players on 42-week contracts, the 400 Club fund-raising to save Rovers – meant this level of preparation and concentration on the opposition was difficult.

After St Pat’s, Rovers had two days to ready themselves for Rubin Kazan, a side that had drawn with Barcelona in the Champions League the season before. When Obafemi Martins scored for the visitors in Dublin after three minutes, O’Neill will have put it down to lack of preparation.

Ultimately Rovers lost all those group games but Tottenham as well as Kazan and Greek champions PAOK knew Rovers’ achievement was to be on the same stage. For 12 minutes of the second half at Tottenham, Rovers were winning.

But a fortnight after the last group game O’Neill was gone. He had played 31 times for Northern Ireland as an unfulfilled winger, now he was their new manager.

Northern Ireland had just come a distant fifth in their Euro 2012 qualification group, losing their last four qualifiers, including 4-1 in Estonia, as hope unravelled under Nigel Worthington. O’Neill was inheriting a squad of players to whom defeat had become a norm. The days of former manager Billy Bingham, who capped O’Neill, felt a long time ago.

Culture is a term O’Neill uses and what he was taking on was a losing one on the pitch and dispirited one off it. The dearth of players meant the personnel would remain the same, though.

“I got those players in and told them they had to drive it, the culture and attitude,” he has explained.

“They needed their own motivation too. If you are constantly turning up and getting spanked, and your club manager is telling you it’s time to pack it in, then it’s hard. Chris Brunt hadn’t played in a winning Northern Irish team for four years, Jonny Evans hadn’t for two years. I wanted them to see that. It was a risk because it might have demoralised them.”

Four sometimes troubled years later – including a defeat in Luxembourg – Northern Ireland were at their first ever European Championships having won their qualification group. Even though they had no training base, and still don’t, O’Neill had created what Aaron Hughes called “a culture of standards”, and from it came an upturn in unity, spirit, then results.

People began to take note. They wondered how Northern Ireland were more than the sum of their parts. O’Neill credits the players’ commitment to his ideas – as Louis Van Gaal once said: “The most important quality of a manager is to make his players believe in what he’s doing”.

In turn the players credit O’Neill’s enthusiasm, professionalism and intelligence. He has overseen an evolution.

It has not always been smooth – 2013’s defeat in Luxembourg was followed by one in Azerbaijan – and there have been disagreements with the likes of Kyle Lafferty.

But when he departs full-time for Stoke City, as well as a sense of Irish loss, there will also be a material loss – of single-mindedness, long-term thinking, preparation.

Of all the irritating statistics football eejits spout, perhaps the worst is the win ratio for managers. Offered as knowledge but actually revealing a lack of it, the win ratio is devoid of context.

O’Neill, for example, was told that Northern Ireland’s failure to beat Scotland in a friendly in March 2015 was somehow significant, another defeat. O’Neill didn’t think so. He wasn’t thinking about his win ratio because he knew he had won – as he said after Hampden Park, he had found a player.

Previously Stuart Dallas had one cap – half an hour in a 2011 friendly under Worthington. Scotland was his second cap. Fours years on, Dallas had gone from Crusaders to Brentford and was about to join Leeds. O’Neill tracked him.

Four days after Scotland, Dallas played in a Euro 2016 qualifier against Finland. Northern Ireland won 2-1 in a game that mattered. Preparation.

O’Neill had placed team development ahead of friendly results – a feature seen again in the Nations League. Some managers do not, which is why ultimately they fail.

Today Dallas has 41 caps and he may well be the first name on the teamsheet when O’Neill pens his XI for the Euro 2020 farewell qualifier in Belfast against the Netherlands. Dallas has been excellent in the most recent Irish displays – against Germany in Belfast and Holland in Rotterdam – and his growth is emblematic of the squad as a whole.

From losing 6-0 to the Dutch to taking the lead against them and only losing to injury-time goals. From 102nd in Fifa’s ranking after the 2012 6-0 to 34th today. From losing at home to Estonia to winning away in Estonia.

Still to come, there is Germany in Frankfurt for O’Neill and Northern Ireland next Tuesday. Should a March play-off be earned, he will almost certainly be around for it. So this is a goodbye of a kind.

Though O’Neill is leaving for the bottom of England’s Championship there is no bad feeling. He will receive a heartfelt ovation at Windsor Park and he will deserve it.

As at Shamrock Rovers, he took over in a low green moment and left on a high.

Stoke City will see the parallels. Potteries be prepared: this is one formidable manager.