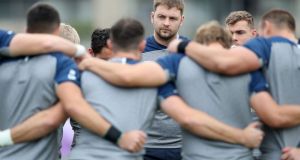 Iain Henderson: Ulster’s new club skipper gets to lead his home province out for the first time since officially taking over from Rory Best. Photograph: Dan Sheridan/Inpho

While this looks like it could be a tense enough affair, Ulster at least travel to the West Country buoyed by having their strongest side ready to hit the Rec.

As expected Iain Henderson returns to the starting team, and the new club skipper gets to lead his home province out for the first time since officially taking over from Rory Best who, incidentally, will captain the Barbarians later on Saturday afternoon against Fiji at Twickenham in his last game.

It will be Henderson’s first game since Ireland crashed out of the World Cup in Tokyo against New Zealand nearly a month ago, so theoretically no better time for the 27-year-old to put it all behind him than in an important Champions Cup opener.

Another crucial return for the Northern province is out-half Billy Burns, who is back after not being involved in Ulster’s previous two Pro14 clashes – at home in the win over Zebre and last week’s away loss at Munster.

Burns’ presence not only sets up his eye-catching clash with older brother Freddie, who is at full-back for Bath, but also gives Dan McFarland’s side a much greater edge attacking-wise than has been the case recently.

Indeed, Ulster’s options going forward have been further boosted thanks to Will Addison coming back from an injury which forced him off against Zebre this month. He replaces Matt Faddes at full-back.

The visitors also have Marcell Coetzee, after being stood down for Munster, and his venomous ball-carrying and breakdown work will be pivotal to their hopes, along with the hard graft of Jordi Murphy.

Bath’s back-row contains Sam Underhill on his first game back since being on the losing side at the World Cup final.

Bath’s other World Cup returnees are Jonathan Joseph and Ruaridh McConnochie, who arrive in the wake of last weekend’s victory at home to Northampton Saints, which took the West Country club away from being bottom in the Premiership table.

No doubt sensing the physicality Bath are going to throw at this game, Mattie Rea has been given the number six jersey, with Sean Reidy being benched.

The scrum will be an area where the home side fancy causing Ulster some discomfort, but ex-Leinster props Jack McGrath and Marty Moore, who will be playing only their second game together since heading to Belfast, were well up for their primary roles at Thomond Park last week, where McFarland’s side were strong at set-piece time.

Other tasty looking match-ups bring Stuart McCloskey and Jamie Roberts together in midfield, and out on the wing Jacob Stockdale will have to be on his mettle against Semesa Rokoduguni.

The place-kicking duel between John Cooney and Rhys Priestland could also be pivotal to the outcome.

Working on the basis that two away wins are ideally needed, alongside three victories at home, to allow Ulster replicate last season’s achievement of a first quarter-final in five years, this game and next month’s trip to Harlequins have to be bountiful for the Northern province as triumphing at Clermont Auvergne looks unlikely.

Ulster also go to Bath having won there on the two previous times they have visited, though both were nearly a decade ago.