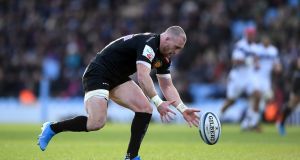 Fine is probably not the word to describe the current state of Saracens.

The holders go into the opening round of the Champions Cup this weekend set to appeal against a sanction of £5m, and a 35-point deduction, for breaching the Premiership’s salary cap.

They are likely to be relieved of £50,000 for failing to turn up for last week’s European Cup launch in Cardiff and as they have been considering fielding a weakened side in group matches, which could earn them a disrepute charge, the men in black may turn into the men in the red.

Saracens start their campaign at Racing 92 on Sunday, the team they defeated in the 2016 final in Lyon when they won the Champions Cup for the first time.

The Paris side lost in 2018 to Leinster in Bilbao and their recent pedigree would make it a bold decision for Saracens to extend the rest of most of their returning England World Cup players, although Racing have only won one home match in the Top 14 this season and are 10th in the table, two points above the relegation zone but three off third place.

Only two teams won the Champions Cup in between the 2015 and 2019 World Cups: Saracens three times and Leinster. If 2016 is taken as a template, this year should be dominated by the English and French who are better able to absorb the impact of assimilating players who have been away for six months in a bid to conquer Japan than the Celtic nations, because their talent is spread far more thinly.

Four years ago, four of the group winners were English and Racing pipped Northampton in the fifth on bonus points. The Pro14 did not provide a quarter-finalist, with Leinster propping up their pool with one victory and Munster finishing with a 50 per cent record, like Glasgow.

Their combined group record was 14 victories and 28 defeats while last season 15 losses were outweighed by 26 wins and a draw as the league supplied five of the last eight.

“I think that Saracens will use what has happened to them as motivation in Europe,” said the Leinster outhalf Johnny Sexton. “It is not something that concerns us because it is a Premiership issue. There has been talk of them being stripped of titles, but for me their three European successes are set in stone because they were worthy winners.

“They are one hell of a team as they showed in the final against us in Newcastle last season. It was as high as an international game – in terms of physicality and intensity – can be and an outstanding team dominated us in the second half.”

With only two of France’s six teams in the tournament in the top six of the Top 14 after the first nine rounds, Lyon, the leaders, and Clermont Auvergne who are in sixth, it looks an open tournament. That is because Saracens are putting Premiership survival ahead of a fourth Champions Cup in five years, as well as the potential effect of the World Cup campaign on the Celtic sides.

Exeter have had a lot to say about Saracens, understandably given the finals they have lost to them in recent years, but their focus has to be on repairing a European record that is a stark contrast to the success they have enjoyed in the Premiership. In six Champions Cup campaigns, they have yet to finish the group stage in credit and have only once made the knockout stage, and then at the very last gasp.

They have yet to crack a key factor in Europe, doing well away; in 19 trips away from Sandy Park, they have recorded five victories, although it was their home form last season, when they drew at home to Munster and then lost to Gloucester, that ultimately cost them.

They are in a group with Sale and Glasgow and start on Saturday at La Rochelle, where Ronan O’Gara joined the coaching team after two years in New Zealand.

An issue for Exeter in Europe has been a cutting edge in tight matches but this season they have Stuart Hogg at fullback. With the season now stretching until well into June, the Chiefs’ head coach, Rob Baxter, reckoned the attacking threat posed by the Scotland international would ultimately be worth more than an extra forward to get his side through the winter slog.

“He can help give us that edge in big games where maybe we have come up a little bit short,” said Baxter. “We will have to battle our way through some games to get to the point where our match-winners can make a difference. Given our form so far this season, I do not know that we can say we are strong favourites for the group. We have to step up.”

Exeter’s chairman, Tony Rowe, has been the most vocal of Saracens’ critics following their salary cap hearing, even suggesting the Chiefs may call off next month’s meeting between the sides at Sandy Park unless Sarries accept their punishment.

The best way for Exeter to take a stand would be to succeed them in the Champions Cup given that their failure in the tournament so far cannot be put down to their rivals having a different interpretation of the rules than the rest.